I would never normally break the Times's paywall, but this is too important an article (from a couple of days back) not to share as widely as possible (and it's one of the reasons why I'm happy to subscribe to the Times).

It comes from the reporter who did so much to expose the grooming scandal in Northern towns and cities like Rotherham, Andrew Norfolk, and it's the kind of informed reporting that I'm starting to despair will ever get much of a hearing on the BBC, despite offering an obviously relevant and highly important point of view. It should be front-and-centre in the BBC's coverage, but isn't: 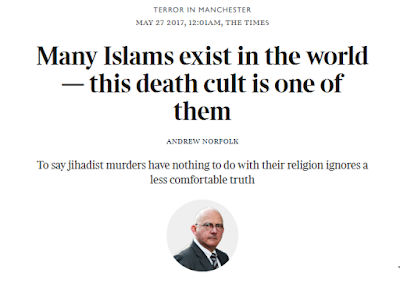 At first glance, it might seem difficult to imagine two groups of Muslims with so little in common.

Build a prison. In one wing, incarcerate those who serially abuse young girls in the back streets of English towns. In another, lock up the jihadist ideologues who plot mass slaughter in the name of God.

They all claim to be Muslim but while the adulterous, alcohol-swilling lowlifes of Rotherham and Rochdale betray multiple Islamic precepts on a daily basis, their fellow inmates view themselves as soldiers of the faith in its purest form.

Most Muslims would not rush to pay a prison visit. They routinely condemn both groups as despicable criminals whose conduct has nothing to do with Islam.

For Britons whose desire is for all who live on this island to somehow find a way to muddle along together, this is a reassuring thought, so comforting that it has almost become a commonplace. In recent years, no press conference after a sex-grooming trial has been complete without a police officer’s pronouncement that the perpetrators’ ethnicity and religion was utterly irrelevant to their crimes.

Islamist terror strikes are likewise met by politicians and community leaders with statements condemning the attack while stressing the falsity of perpetrators’ claim to have acted in the name of Allah. Monday’s Manchester atrocity was no exception.

Salman Abedi’s bomb brought carnage to a concert whose audience was predominantly young teenage girls. That anyone might view innocent children as legitimate targets intensified the need to distance the act from the teaching of one of the world’s great religions.

In the prison, different attitudes prevail. If they have nothing else in common, Pakistani child-sex groomers and Isis terrorists share at least one attribute. For them, no 13-year-old non-Muslim girl is innocent. Nor is she a child.

One group fails every test of what it means to be a good Muslim; the other finds such certainty in its literalist vision of the righteous path that it condemns most fellow Muslims as apostates. They unite in their contempt for white girls. One eyes an easy outlet for cheap lust. To jihadists, as a symbol of western decadence and immorality there could be no more suitable target than a venue packed with British girls worshipping a scantily clad young American singer.

Targeting children for sex or death is doubtless abhorrent to the vast majority of British Muslims, for whom a truer reflection of Islam was the kindness of fellow believers who came to the aid of the victims and who stood, in defiance of terrorism, in solidarity with fellow Mancunians.

How to pray, how to wash, what to wear; there seems barely any element of the faith that is not subject to furious debate long before bigger issues — such as the meaning of jihad and when it is permissible to wage war for the sake of Allah — are confronted.

Consider patriarchal attitudes towards women, however, within different Islamic sects and nations and in different centuries, and you will find a path well trodden. In all four schools of Islamic jurisprudence, girls become women — and eligible for marriage — at puberty. Women are either modest, housebound wives and mothers or Jezebel temptresses, shameless objects of sexual desire, born to lure men astray.

One need not travel far from Manchester to understand why some men, schooled in medieval theology or the conservative culture of homelands in south Asia, the Middle East or north Africa, struggle to treat western women with respect.

Near Bury, Greater Manchester, is a former sanatorium that since 1975 has been home to Britain’s leading Islamic boys’ seminary. In 2014, Ofsted hailed its production of “exemplary British citizens”. Its 21st-century perspective is instructive.

A website promoting the seminary’s teaching states that Satan uses women “as his avenue to create evil in society”. She should always remain in the home. If she must venture out, her clothing should conceal her entire body. Unless hidden from view, she will inevitably “attract men like swamps of flies are attracted to uncovered sweets”.

Befriending a non-Muslim invites corruption. To marry a Christian or Jewish woman risks the filtering of “their repulsive qualities into Muslim homes”. Singing and dancing is banned. The music industry is a Jewish-influenced means of “spreading the Satanic web”. We allow such values to be taught in 21st-century Britain.

Girls. Music. Danger. Pollution. In the early 1950s, Sayyid Qutb, an Egyptian writer who played a pivotal role in the birth of supremacist Islamist ideology, studied briefly at a college in Colorado. His verdict on western women spat contempt. “The American girl is well acquainted with her body’s seductive capacity. She knows it lies in the face, in the expressive eyes and thirsty lips. [It] lies in the round breasts, the full buttocks, and in the shapely thighs, sleek legs — and she shows all this and does not hide it.”

American dance music was for Qutb, a hero of the Muslim Brotherhood, what “savage bushmen created to satisfy their primitive desires”. He described his visit to a church dance: “They danced to the tunes of the gramophone and the dancefloor was replete with tapping feet, enticing legs, arms wrapped around waists, lips pressed to lips and chests pressed to chests. The atmosphere was full of desire.”

Sexuality and freedom, in women, are to be stamped upon. An errant daughter or sister shames her entire family. Cue acid attacks and honour killings.

These are not fringe opinions. In 2013, a study of 38,000 Muslims by the Pew Research Centre found that 46 per cent of Pakistanis and 59 per cent of Bangladeshis believed it was sometimes justified for family members to kill women as a punishment for pre-marital sex or adultery.

More than 80 per cent of Muslims in Jordan, Egypt, and Pakistan said that a wife must always obey her husband. In Iraq, Morocco and Tunisia it was more than 90 per cent.

In Afghanistan, the Taliban outlawed music and the education of girls. There, child marriage flourishes as in so many Muslim nations including Iran, where women are banned from dancing and performing music on stage.

Religious laws that dictate the treatment of women in many Islamic states reached new levels of barbarity in 2014 when Islamic State seized huge swathes of Iraq and Syria and declared its own caliphate.

Its interpretation of God’s rules led to mass public beheadings and to the enslavement of more than 3,000 Yazidi girls and young women.

Rules published by Isis in December 2014 codified lawful conduct with slaves. They included a declaration that “it is permissible to have intercourse with the female slave who hasn’t reached puberty, if she is fit for intercourse”.

For millions of Muslims worldwide who believe they follow a religion of peace, such crazed bloodlust is a monstrous perversion of Islam.

As the historian Tom Holland has noted, the truth is less comfortable. Isis argues that its killings and use of concubines is “sanctioned by the Koran and by the sayings and example of Muhammad”.

“To dismiss them as psychopaths is to ignore what is most truly terrifying about them — that their thuggery and greed coexist with a profound strain of religiosity. [Isis] propagandists present it as charged by God with restoring to the world the pristine Islam that existed back in the days of Muhammad and his immediate successors.”

Dewsbury is far from Sinjar but it was no surprise when Baroness Warsi suggested that in her West Yorkshire home town, some Pakistani men “see woman as second-class citizens and white women as third-class citizens”.

They “believe white girls are fair game”, she said. Shabir Ahmed, leader of the Rochdale grooming gang, would have agreed. The 59-year-old kebab shop worker told a 15-year-old girl that it was not wrong of him to deliver her to numerous Pakistani men for sex because in his homeland “you’re allowed to have sex with girls from the age of 11”.

Ahmed enjoyed having sex with children but worried they would make him impure. He forced girls to wash before he abused them. Afterwards he would “go home, have a shower, say two units of prayer and ask Allah for forgiveness”.

Muslim girls are saints or sinners who must be punished. Western girls are corrupt sluts. This is not an uncommon perspective in the Islamic world.

Ariana Grande, a 23-year-old singer from Florida, is a former children’s TV star whose global Dangerous Woman tour reached Manchester, 12 miles from Rochdale, on Monday. A year ago, she told Twitter critics that “expressing sexuality in art” was no more an invitation for disrespect than “wearing a short skirt is asking for assault”.

Girls the same age as those serially abused by Ahmed and his friends went to the city in their thousands to watch a mini-skirted, cat-eared woman dance and sing on stage in black thigh boots.

When it gleefully claimed responsibility for the slaughter of 22 “crusaders” by its “soldier of the caliphate”, Isis condemned the Arena event as “shameless”. It said that the bomb plot succeeded “with Allah’s grace and support”. There are many Islams in this world. This death cult is one of them.
Posted by Craig at 13:00