The BBC's diplomatic correspondent James Landale sent out a tweet yesterday that 'went viral', going on to received over 18,000 re-tweets and even more 'likes': 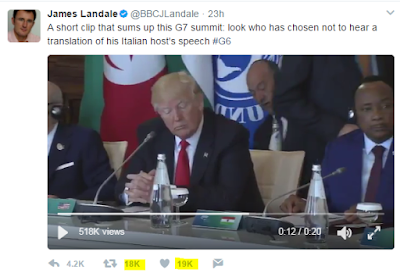 The thread beneath his tweet began well for him, with The Media Show presenter Andrea Catherwood, among many others, joining in disapproval and mockery of the US president:

Unfortunately, many others - some avowedly not Trump supporters - began pointing out that Trump almost certainly was wearing a translation device and later produced the photographic evidence to prove it. Andrea Catherwood at first refused to believe them and then, when the evidence became too conclusive, simply shut up and went away. (A story for a future edition of The Media Show maybe?)

James's tweet came to the attention of Sean 'Spicy' Spicer: 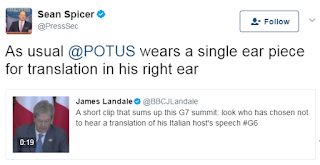 James Landale then sent forth a second tweet, which - it has to be said - received far, far, far fewer re-tweets and likes: 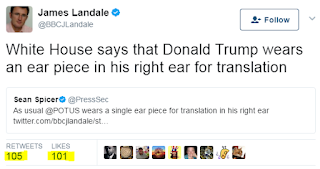 Unfortunately (for him), the comments below this second tweet won't have made for happy reading for the BBC's diplomatic correspondent. Here's a highly representative selection:
Posted by Craig at 11:09