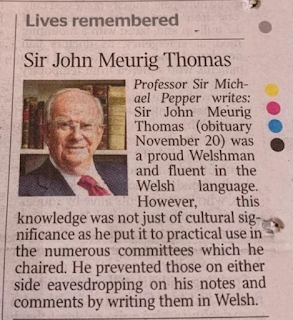 The ostentatiously Welsh Huw got out of bed this morning, on the wrong side no doubt, and tweeted:

I don't think Sir Michael Pepper meant that Sir John Meurig Thomas used Welsh in his daily life "simply" to thwart others. (That's fake news, and from a BBC newsreader!).
And I'd say that if Sir John did what Sir Michael described regularly it shouldn't be held as a slur on the Welsh nation for him to "simply" recount that that's exactly what Sir John did or to say why he did it.
Of course though, silly me, taking offence doesn't need adequate reasons these days, especially on Twitter. It's enough just to take it, send out a snippy tweet and bask in the 'likes' from people with Welsh flags in their Twitter bios.
What a world!
Posted by Craig at 10:42