Hope you had a lovely Christmas Day. Thank you for keeping the blog so well-fed with comments. There's been a lot going on, hasn't there?

1. Yes, BBC newsreaders on BBC Radio 4 really are repeatedly saying "France has confirmed its first case of the new variant of coronavirus which originated in the UK" this morning - which is poorly-worded at best, and 'fake news' at worst. The BBC has previously acknowledged that the variant may well have originated outside the UK and merely been detected here first by our well-equipped scientists. At least they're not calling it "the English virus"...yet.

2. Watching the BBC Reality Check correspondent Chris Morris making countless appearance on the BBC News Channel on Christmas Eve made me think of 'Why the long face?' jokes, usually made about horses. Chris had a long face on all day. After all his endless scaremongering 'on behalf of reality' over the years, here was the thing he had been so relentless down on for years coming to fruition, against all his gloomy predictions. Never was a long face more easily explained. His misery later got translated into a very negative piece on the BBC News website containing plenty more gloom. He's still carrying on regardless, and will be allowed to do so by the BBC.

3. I read recently that June Sarpong OBE, the BBC's part-time diversity chief, has recently been made a trustee of the Donmar Warehouse. Her irresistible, seemingly limitless rise continues. Despite that she's talking about "the unfairness baked into our system" in Daily Telegraph today and using the highly divisive phrase "white privilege":

Bring on the satirists! 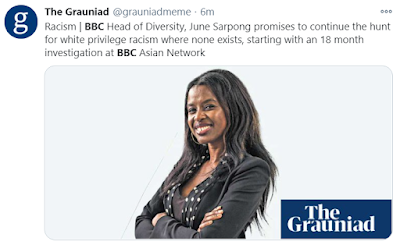 4. Lewis Hamilton is guest-editing Radio 4's Today today. and talking 'race' as much as 'races'. Even former ITN stalwart Alastair Stewart, a massive fan of Lewis, has his reservations though:

On the big issue of black history, I'd have preferred to hear Lewis Hamilton challenged by a critic, than in conversation with the like minded David Olusoga. He could easily have dealt with it. 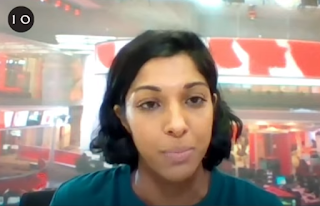 5. Returning to the theme of an earlier post which listed the recent questions put by BBC Politics reporters at the Downing Street press conferences and found that they were remarkably consistent in the pushing the 'The Government is not acting fast enough or hard enough' line over coronavirus, well, the last one before Christmas brought a double dose of that from BBC political correspondent Leila Nathoo. This is what she asked Matt Hancock & Co:

23 Dec: LEILA NATHOO, BBC: You've just said when it comes to coronavirus that it's better to act sooner but the Prime Minister said on Saturday that the new strain was present across the country, your chief scientific advisor said on Monday that it wasn't possible to stop it spreading beyond the South East. and you're only announcing today the widening of Tier 4 within the South East and East of England and only from Boxing Day. Haven't you wasted valuable time in trying to get ahead of the new strain of the virus? And if I may to Dr Harries, you talked about yet another more transmissible strain being identified from South Africa. How confident are you that the new four-tier system is strong enough to tackle that?

Wonder how many tiers would satisfy the BBC?