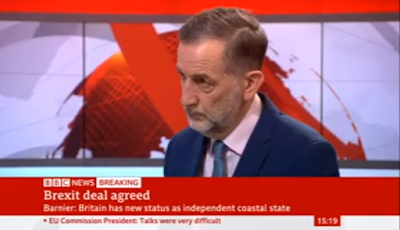 I'm reviewing his performances on the BBC News Channel on Christmas Eve and have come to the bits where he responded to the two press conferences announcing the EU/UK deal - the first from the EU, the second from the UK government.

Both performances absolutely epitomise the BBC's reporting of the two sides over the past four and a half years.

Words like "interesting", "fact", and "highlighted" were deployed, along with several uses of "said".

Their remarks were presented without criticism, or countering points, or distancing words. It was all very respectful.

Then Chris belittled concerns about fishing.

After the UK press conference, the BBC presenter reintroduced Chris Morris with the words, "I want to speak to Chris Morris, who has been sitting with me listening to those news conferences, and listening to Boris Johnson in particular, and was quite keen to just pick up on a few of the things that you heard".

Guess what happened next? What precisely was it that Chris Morris was "quite keen" to say?

Yes, the BBC's reality checker-in-chief launched straight into 'reality checking' Boris Johnson, picking up on something the UK PM said and disagreed with it. The phrases "ignores the fact" was quickly deployed.

A long litany of negative points about what Brexit means the UK then followed, plus more "I'm not quite clear where the argument comes" towards positive claims about the post-Brexit future.

Then came more negative stuff about what we'll be losing regarding access to EU crime databases.

And then, to conclude, "I think both sides will try as hard as they can to move towards a situation which suits both of them. Obviously, as much cooperation as possible but it won't be quite the same as being inside the tent."

There's not a doubt in my head that Chris Morris wishes we were still "inside the tent". His entire reporting leaves no room for doubt about that.

Feel free to mention Sherlock, and bears in woods, and the exact faith of popes...

Just to end today's string of Chris Morris posts, here's a complete transcript of one of the BBC Reality Check chief correspondent's contributions to the BBC News Channel on the morning of Christmas Eve. It oozes bias:

Geeta Guru-Murthy: What have been the difficult bits to get through?

Chris Morris: There has been lots of discussion in recent days on fishing. Species by species. Anyone who thought that taking back control of fishing meant 100% control immediately is going to be disappointed. This is a negotiation. There was always going to be compromise. The British fishing fleet doesn't actually have the capacity to catch all the fish currently caught by the EU boats in UK waters anyway. It is about the transition from where we are now to something different in the future. Initially, the UK wanted 80% of the value of the fish currently caught by EU boats in UK waters to be returned. The initial EU offer was 18%. The compromise is going to be a lot closer, to begin with, to the EU position but, in the long run, the UK will gain more and more control over its fishing waters. Politically, this may be incredibly important. Among a small minority there will be a betrayal narrative - we haven't taken back control of our waters in full - but economically fishing is a minnow. It is about much, much bigger things, this deal. It's about...There is going to be tariff free access to the single market, and that's great for businesses, but it is about the terms in which that tariff free access can continue in future.

Geeta Guru-Murthy: Overall, will businesses find that they are losing or gaining? Is that possible to say at this point?

Chris Morris: Many businesses that trade across the border will not recognise the idea that this is going to be cutting red tape. For them, frankly, this is laughable, because there will be new bureaucracy, new costs, new barriers, new delays, because even though there are not tariffs at borders there will be all sorts of other bits of border bureaucracy that they have to go through. Some of it will be British red tape, some of it will be European red tape, but the idea that there will be less red tape for people trading across borders is frankly a fantasy. It is true that, over time, the UK has won the right to back away from EU regulation more generally. Again, it comes down to the detail of what happens if it exercises that right. In what circumstances can the EU strike back, if the UK decides to move away from the EU, regulation? And can, for example, if the UK decides to reach an agreement in one area, can the EU hit back with tariffs or taxes in another area? So through the detail of that economic relationship which, compared to fishing, involves billions of pounds of business now and in future, that is what is really important for businesses that trade with Europe.

Geeta Guru-Murthy: In terms of the UK being able to fundamentally change its economic model or do fantastic trade deals with other parts of the world, what does this deal mean for that?

Chris Morris: In terms of trade deals the UK has the right to do its own independent trade deals around the world. That is one of the things the government promised, and it has been delivered because it is no longer in the customs union. But we have to be clear about what that means. The government's own estimate is that a free-trade deal with the United States for example would add 0.16% to the size of our economy over 15 years. Whereas, the Office for Budget Responsibility thinks the current free trade deal or the free trade deal we think is going to be done with the EU will cut 4%. So 0.16%, cutting 4%, the deal with the EU, compared to staying as an EU member state. So, it is going to be...

Geeta Guru-Murthy: That is less growth. It's 4% less growth. We will still be growing but at a slower rate. And growth means jobs and how much money we all have.

Chris Morris: The bigger the economy is, the more money circulates around it, the more jobs potentially there are going to be. It is going to be really difficult to replace the trade we are going to lose with Europe, because we are putting up barriers between ourselves and them, with the trade deals we will do around the world. So it is a very long-term bet on those parts of the world that are growing more quickly, compared to the vast amount of trade we do with our next-door neighbours.

Geeta Guru-Murthy: Just very quickly, is our life going to change much from the 1st of January, those of us that don't trade, but in other ways, how will we notice this?

Chris Morris: We will notice small things. When I say there will be more bureaucracy across borders for traders, there will also be more bureaucracy across borders for travellers. So you need to have six months on your passport, you can't go with just a few weeks left. You will probably need more...you will need car insurance, health insurance, all sorts of those little things. And there may be small things we notice, such as it is more difficult to get a parcel delivered from Europe, because there will be border formalities. We are putting up little bits of bureaucracy if you like. But one of the main aims of the Brexiteers was to take back control of money, borders and laws. If sovereignty is your thing, whatever it means, you can certainly make an argument that this agreement will gain you more sovereignty. But it is difficult to exercise sovereignty in a world that is so interconnected. That is what this government and successive governments will be juggling with, for years to come, in the relationship with our nearest neighbours.

Geeta Guru-Murthy: It is not over, is it?

Chris Morris: No, it is not.

Geeta Guru-Murthy: We will be back with Chris once we have more details and a confirmation of a deal.