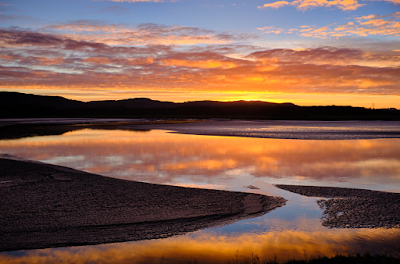 With or without a Bradshaw's and Covid restrictions permitting, travel to the city of Lancaster on the West Coast main line.
After a brief, inevitable detour to Morecambe and back, take the correct train from Lancaster Station and, after a very Brief Encounter with Binkie Huckerback and Dame Celia Molestrangler at Carnforth Station, you'll soon find yourself clattering along the bird-rich edge of Morecambe Bay.
You'll see a nature reserve as you pass but you probably won't hear the booming bitterns of Leighton Moss (which Chris Packham & Co. used to haunt on the BBC's Watches. They struggled with the bitterns too).
You'll then move inland and pass through the greenery of Silverdale. That's where the apparent highlight of BBC One's widely-panned Christmas Day schedule this year - the late Victoria Wood - lived in an out-of-the-way traffic-unfriendly lane leading down to a popular cove. From her house you can look across empty fields (possibly containing cows and sheep when people aren't looking) towards the enchanting church at the heart of the village, many minutes walk away down a dangerous road. (The BBC's Mark Easton would doubtless want houses built on those fields for incomers).
You'll then cross the fabulous viaduct at Arnside (a small town with art galleries, great pubs, and hideous parking problems). The views are spectacular. Arnside is hugged at various distances by hills in all directions, some receding towards eternity, and quicksand-filled cul-de-sacs much visited by BBC types eager to show themselves bravely sinking into the sands in their wellies for public information purposes (and ratings).
Beauty abounds, and you're soon chuntering on and passing through the retirees' paradise of Grange-over-Sands, still clinging to the shoreline of Morecambe Bay.
Grange itself clings to ever-climbing hills, possibly to the inconvenience of some of its less-prepared retirees. The only way is up there after you get off the train. That's why I believe a visit there must have inspired a 1980s Number One hit by Yazz, though I'll leave it to the all-knowing Ms Spring and Mr Wendling of the BBC to confirm that.
On and on you go, on trains of varying quality (depending on the company running the service), till you reach my favourite moment of the journey and the next great bridge: the breathtaking crossing towards Stan Laurel's Ulverston. The image at the top of this post is a Twitter photo of the bay at Ulverston as the sun did something. Turn one way and you're looking over the magic of Morecambe Bay again. Turn another and you're looking down a valley that will eventually take to you to Coniston, its lake and its Old Man.
It's long been a stupifyingly overpriced journey, but it's a belter. Pushing the boat out, I've done it three times in 50 years. (It's usually been a car journey instead). 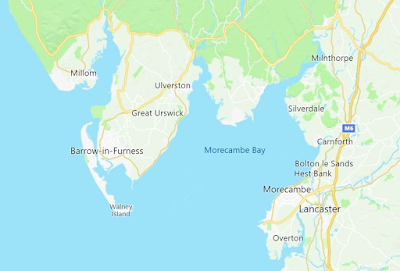 And then, with the train moving inland and the scenery suddenly turning dull, you grind on towards Dalton-in-Furness.
Dalton-in-Furness, a slice of early Coronation Street clinging to the bottom of a steep hill, is best known for its wildlife park where a female keeper was killed by a rare, endangered tiger and where a rare, endangered rhino escaped, ran amok and was shot and killed. I once got caught there in a thunderstorm and found myself worrying for a tropical snake when the power went off. I surprised myself by being so anxious about its wellbeing and by standing watch over it. It was, of course, behind glass at the time. The park's still going, now finally under new owners. Dalton's not a very 'BBC' place.
And then a weary few minutes more carry you on to Barrow-in-Furness.
I see Barrow-in-Furness most days, over the sea from Morecambe (weather-permitting).
I was brought up to regard it as an absolute dump, and visits in my younger years didn't dispel that impression. In my bookish late teens I was horrified to find only a WH Smith and a charity shop selling Christian books. But it's improved. Those who like shopping can now go there (coronavirus-permitting) and find things to buy and places to eat.
Don't forget that Barrow is the now-forsaken home town of Dave Myers of the BBC's Hairy Bikers. His pretentious new Salvador Dali-like moustache, possibly even more than his abandonment of Barrow to move somewhere posh down south, has seen his popularity plummet hereabouts. (From hero to zero, and a zero who's trying to be Zorro.) Dave Myers would be persona non grata among the Furness end of my family if only they could stop criticising him.
And Barrow has plenty of industrial history.
I count it a particularly fine discovery today to learn of a living, Barrow-born artist called John Duffin. He does paintings of all sorts of places, including many in London. But it's his Barrow paintings that I want to recommend above all.
These are beautiful, don't you think? 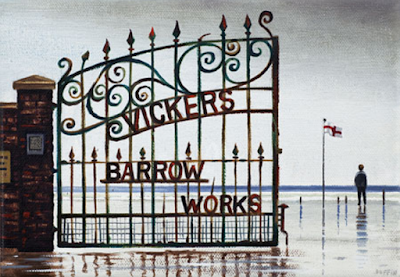 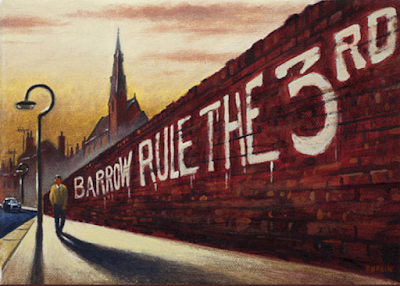 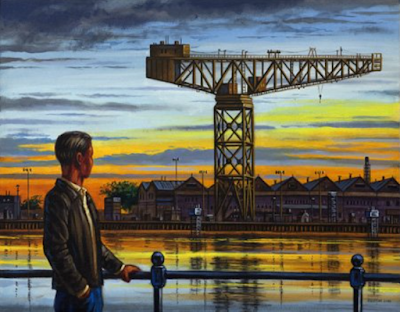 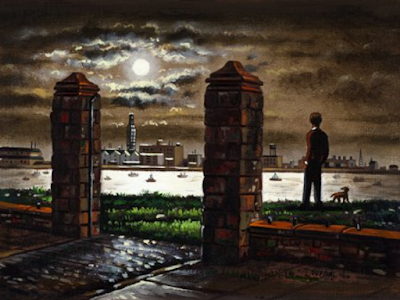 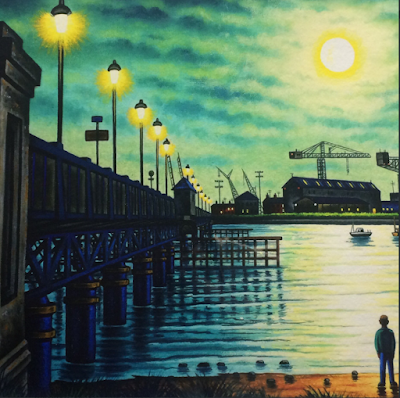 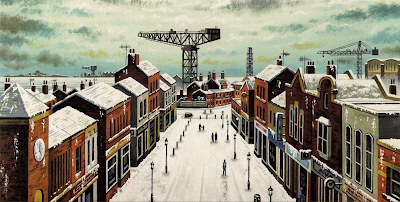