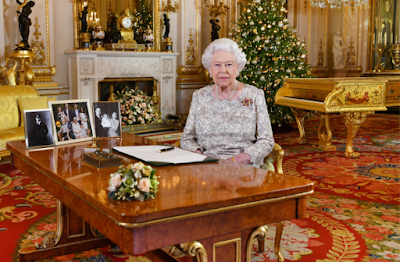 How fascinating that Her Majesty the Queen's 2020 Christmas message beat everything else to win the annual Broadcasters’ Audience Research Board (Barb) ratings prize on Christmas Day!
Though she crossed channels, on the BBC figures alone Good Queen Elizabeth beat Call the Midwife, the revived Blankety Blank, Strictly Come Dancing and Michael McIntyre's The Wheel by almost a million viewers.
The licence-fee-funded BBC claimed victory over its commercial rivals though because it got all the the non-royal top spots, with ITV's Coronation Street coming into sixth.
Alas for the BBC though, former Christmas ratings giant Eastenders fell behind ITV's Emmerdale - and even behind the BBC programme BBC defenders are allowed to hate: Mrs Brown's Boys.
Still, here's Kate Phillips, the acting controller of BBC One, crowing about the ratings:

BBC One had the most popular show on Christmas Day as audiences escaped to Poplar for the Call the Midwife special.

I’m really proud of the range and quality of programmes we’ve shown across this special day. BBC One entertained the nation and provided something for everyone to enjoy after a particularly difficult year.

Don't forget though Kate. "Everyone" didn't watch your channel.
Far from it in fact: All the four non-royal BBC programmes in the Top 5 ranged between 5.43 million and 4.66 million - under 10% of the UK population. Back in 1986 Eastenders on Christmas Day claimed 30.15 million viewers. Is 5.43 million for your top Christmas Day show this year really something to crow about, Kate?
Oddly, because of family circumstances, I did watch The Wheel and Blankety Blank. (I know!)
Posted by Craig at 06:20