The sound of yet more small axes being ground at the BBC...

It looks as if the 'woke' BBC has rebranded the 1981 Brixton riot as "the Brixton uprising":

[Click to enlarge and read, especially if you're eyesight's as bad as mine] 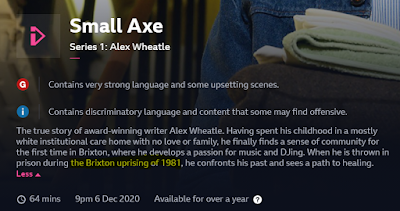 In fairness, that decade, and the decade before it, were marked by other uprisings in the UK - especially by those branded by their fascist oppressors as "football hooligans".
Millwall supporters, to quote just one famous example, were responsible for a large-scale popular uprising in Luton in 1985 during the quarter-final of the FA Cup. They stormed the Winter Palace end apparently.
Posted by Craig at 17:21