Or what Chris Morris got wrong.... 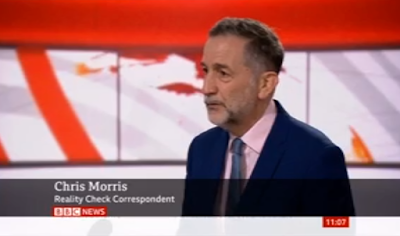 Ben Cobley, author of The Tribe, made a good point this morning on Twitter:

The world would be a much better, saner place if we all had our predictions replayed back to us every now and then. Predictions are a way of expressing our preferences while sounding knowledgeable. For elites, they are a way of standing ahead of others, pre-empting us.

Let's test that on the BBC's chief reality check correspondent, Chris Morris.
*******
This is a BBC News website article he wrote dated 5 December 2019, just prior to the last year's general election.
It began in classic BBC Reality Check mode, debunking a Conservative minister and saying he is factually wrong:

Chancellor of the Exchequer Sajid Javid has said there was not "a single doubt" in his mind that the UK would "have agreed and finalised a very ambitious deep and comprehensive trade deal" with the European Union (EU) before the end of next year.
That's when a post-Brexit transition period is due to come to an end.
""Because there's already an agreement, there's already an agreement in principle. It's there," he told BBC Radio 4's Today programme.
But this is not the case.

The BBC's reality checker-in-chief continued with a classic bit of BBC finger-wagging against Brexiteers:

While "Get Brexit Done" may be a good campaign slogan, slogans don't make trade agreements.

Later in this same article, however, Chris Morris moved from ruling on reality in 2019 to predicting reality in 2020, and wrote:

Ratifying any agreement before the end of next year would take several months, so the negotiations themselves would need to be completed by the summer.

Doesn't he "sound knowledgeable" there?
Now though we can rule on him and say:
But that was not the case.
Negotiations were actually completed at the start of winter 2020 (Christmas Eve) and ratification now looks very likely to follow very swiftly, most probably in several days or a very few weeks, not several months.
*******
Let's continue with another article from 2019, this one from November:

One other thing: as well as negotiating with the EU, the UK would also need to sign up to a series of trade agreements round the world to replace those it has as part of the EU.
All of that could take up most of the next decade. It won't be done when the UK leaves the EU - it will only just have begun.

Wrong again. By Christmas Eve 2020 the UK had secured trade deals with 61 countries plus the EU.

This seems to me to perfectly illustrate Ben's point that "predictions are a way of expressing our preferences while sounding knowledgeable".

The BBC's Chris Morris's surely got this so badly wrong because he wanted to believe it would be painfully hard for the UK to sign up to trade deals around the world, and that is down to his feelings about Brexit.