Recently - including when defending itself against claims of bias - the BBC has prayed in aid certain polling data which 'proves' that the public still broadly trusts it.
The BBC has, of course, been highly selective in the data it cites.
So the corporation won't be pleased - to put it mildly - that the latest Reuters Institute Digital News Report shows that trust in BBC News has fallen 20 percentage points in the last five years.
That a massive drop. 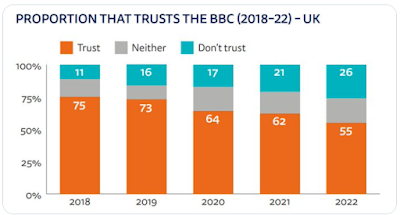 As Guido Fawkes points out, “According to the Reuters Institute distrust of the BBC has more than doubled in the last 4 years”, and “the majority of those who distrust the BBC [53%] are Conservative.”
And as one of Guido's Twitter commenters put it, “If anyone involved in running the BBC does not understand the devastating implications of that, the organisation is truly lost.”
What will make the BBC squirm most here is that this is from Reuters, so they can't just dismiss it.
And it gets worse...
One curious thing about the findings is that the 'overview' from Reuters tries to put a brave face on the BBC findings, despite showing them to be devastating.
What caught my eye was seeing the name of the main man who wrote it, and headed the report: Nic Newman.
I immediately recalled a BBC reporter called Nic Newman.
And, lo and behold, on looking into it with a quick search, the Nic Newman behind this Reuters report is indeed the very same Nic Newman who used to work for the BBC as a strategist/journalist.
[We Beebwatchers have long memories].
So, to pile on the agony for the BBC, it's a former 'one of their own' who has shown such a huge fall in public trust in the BBC.
Posted by Craig at 17:43