The first online dictionary definition of 'privilege' I came to this afternoon says:

privilege
[ˈprɪvɪlɪdʒ]
NOUN
a special right, advantage, or immunity granted or available only to a particular person or group

The BBC hangs on every word that Sir Lenny Henry, the knighted star of BBC television from The Black and White Minstrel Show to Comic Relief to My Name is Leon.
He only has to make a comment about race and the BBC will make him a top headline story.
He is truly privileged.
At the moment his gripe about how there aren't many non-white faces at festivals like Glastonbury is the fifth most important story in the world. 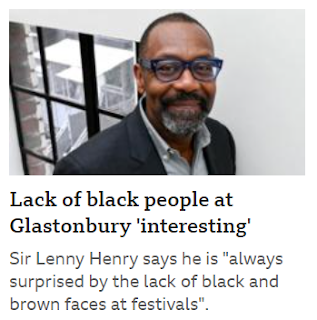 The most popular comments in response to the BBC's tweet about this story aren't probably what the BBC wants to hear. One top comment runs as follows:

In a country that's 86% white, what does he expect? Just because we see a 50-50 mix on BBC & ITV entertainment and drama programmes and a majority of black people in adverts, does it mean it truly reflects the demographics of our society?