When I was a lad I listened to Radio 4's From Our Own Correspondent to learn about the world.
Are there autodidactic lads and lasses out there doing the same today? Are there still teenagers noting down the facts in Kate Adie's introductions?
I ask because today's From Our Own Correspondent included a feature on Georgia [the country not the US state] and began with a few facts from Kate. I imagine a teenager somewhere noting down [1] that  Russia has “a land border with 14 countries” and [2] that “eight of these countries were once part of the old Soviet Union” and [3] that one of them is “the central Asian nation” of Georgia [4] “which sits between Russia, Turkey and Azerbaijan”.
If you were wondering the 14 countries with land borders with Russia are: Kazakhstan, China, Mongolia, Ukraine, Finland, Belarus, Georgia, Azerbaijan, Estonia, Latvia, Lithuania, Poland, Norway and North Korea.
And the eight of those that were once part of the old Soviet Union are: Kazakhstan, Ukraine, Belarus, Georgia, Azerbaijan, Estonia, Latvia and Lithuania.
However, the next bit is where Kate Adie's facts begin going awry. Georgia is not a “central Asian nation”. Central Asia covers the area east of the Caspian Sea to the borders of China and Mongolia. It covers five countries: Kazakhstan, Kyrgyzstan, Tajikistan, Turkmenistan and Uzbekistan, but not Georgia. Georgia is found in the Caucasus, at the intersection of Eastern Europe and Western Asia.
Our fact-hungry youngster would also be somewhat misled by Kate saying that Georgia “sits between Russia, Turkey and Azerbaijan” because there's a bordering country missing from that list. Georgia also has a 136 mile border with Armenia. 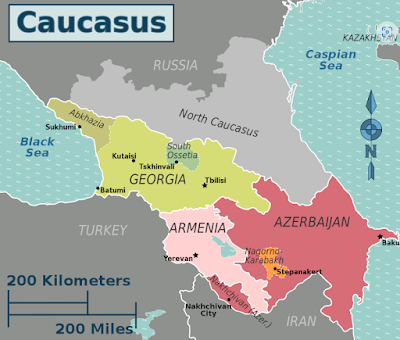 So my childhood self, if living and listening now, would need to be as sceptical of the BBC's facts as I am now I'm a lot older. Not everything you hear on the BBC, even from Kate Adie, is wholly accurate.
Posted by Craig at 13:22