One to make Tim Harford gasp 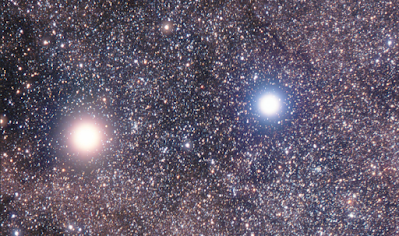 We all mistakes, but the BBC's online report about the Nasa launch of its first rocket from an Australian commercial spaceport went through five versions and four edits - and eight hours! - before someone corrected a rather big numerical blunder.
Earlier versions said:

But the data gathered in that time will help illuminate the secrets of star constellations 430 million light years away, says the chief executive of Equatorial Launch Australia, which runs the space centre.

"Without getting too deep into the science, it was effectively a large X-ray camera looking at various... phenomenon and trying to capture parts of boulders in the Milky Way and particularly the star cluster of Alpha Centauri," Michael Jones told the local network Nine.

But the data gathered by the mission's X-ray camera in that time will help illuminate the secrets of Alpha Centauri A and B, the closest double-star system to Earth that is located just 4.3 light-years away.

The title of Radio 4's statistics show More or Less springs to mind. This was definitely 'More'. A LOT 'More'.

That it took eight hours and many editorial revisions to finally realise this and rectify it beggars belief in an organisation so big and so well-funded.