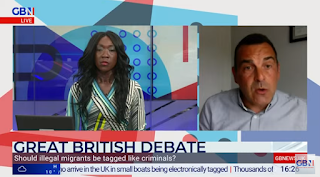 For lots of reasons I've not seen much of GB News or the BBC for months, but I actually sat down today and watched last night's Newsnight on BBC Two and - live - this afternoon's GB News with Nana Akua.
Such a random snapshot proved useful because last night's Newsnight dealt with much the same topic as GB News's 'Great British Debate': the Rwanda/Channel-crossing migrants issue: so it made easy a simple exercise to compare and contrast them.
And the contrasts couldn't be clearer.
Nana's GB News debate saw Nana, the presenter, lay out the pros-and-cons of the debate, but she also declared her own hand. On the question 'Should illegal migrants be tagged like criminals?' she said:

'...But critics say that the plan treats those fleeing persecution as criminals...Well, they are, aren't they? They crossed the Channel illegally. Sorry, did I say that out loud?

She then interviewed Phil Brewer from the Human Trafficking Foundation, who disagreed with her. He argued that the tagging plan won't work and will impact badly on the mental health of the Channel-crossing people being tagged.
What was so pleasing here was that Nana didn't just let him talk but was clearly happy to let him do so, despite her not sharing his point of view. He wasn't interrupted or belittled. He was simply listened to. And he listened to her in return. And Nana left it up to GB News viewers to listen and decide too.
It was all about listening to open-minded people with strong views listening with an open mind to each other.
Then came Kevin Saunders, former Chief Immigration Officer at UK Border Force, who was pro-tagging and, with caveats, pro-Rwanda option echoed Nana's sentiments. Nana didn't disguise the fact that she agreed with him. It was all in the open.
And Kevin quoted the Full-Fact approved stat that some 70 per cent of those crossing the Channel are fighting-aged men aged 18-40. Newsnight's Lewis Goodall, in contrast, ignored that and made more of the the Full-Fact approved stat that the large majority of 'asylum seekers' crossing the Channel are given asylum in the UK, thus showing that they aren't mere economic migrants.
Then on GB News came a discussion on the issue featuring comedian Leo Kearse and broadcaser Lois Perry. Nana continued to make plain her own views to viewers, but kept outlining both sides. Lois and Leo aired their views, sometimes disagreeing, sometimes agreeing, though they broadly agreed with Nana.
Standing back and judging, this was clearly a debate with a bias - a bias in favour of tagging and the Rwanda plan. But the bias was openly presented and the dissenting voice was treated no differently to the agreeing voices and given full freedom to make his points uninterrupted and in just as friendly a spirit.
Compare that to last night's Newsnight and you'll find yourself in a very different place.
The starting point here was a report from Newsnight policy editor Lewis Goodall. It used Lucy Halliday from Care4Calais, an opponent of the government's Rwanda plan, as a 'talking head'. Next came a sympathetic 'asylum seeker' who says he fled the Taliban in Afghanistan. And then a lawyer working for the 'asylum seekers', Jacqueline McKenzie of Leigh Day solicitors.
It was one of those BBC reports that spoke with one voice on one side of the argument.
And then it was back to the Newsnight studio for Lubna Shuja of the Law Society, who sounded unsympathetic to the Rwanda plan, and former Labour home secretary David Blunkett, who also disagreed with it.
Watching Newsnight again, after a few months' abstinence, brought it home to me just how one-sided the BBC can be when it really puts its mind to it.
Though Mark Urban, presenting, struck a detached tone, everything else felt like a campaign video.
Lewis Goodall, reporting, came across as a man on a mission, a campaigner telling you what you must believe if you're a good person like him.
And that's what's so galling. Lewis Goodall, someone who uses long threads on Twitter to garner 'likes' from left-leaning types, gets to play the righteous voice of impartial BBC authority on Newsnight and Twitter.
And Newsnight gets away with presenting the most one-sided airing of a matter of public controversy imaginable with no dissenting voices whatsoever.
All at the public's expense.
Seriously, give me the honest bias and openness to other points of view of GB News any day over the narrow, preachy 'curating' of stories and opinions by the 'impartial' BBC.
Posted by Craig at 18:21