The Daily Telegraph reported this week that Storm Fagan, who blew in as the BBC's Chief Product Officer in 2021, has announced an “ethical approach” to AI, with “the corporation...seeking to puncture online 'echo chambers' that reinforce existing biases” by developing technology “designed to serve up articles and iPlayer suggestions tailored to their interests.” She says:

We have a really ethical approach to machine learning, where we are looking at removing any bias from the algorithm.

It means we are seeing really good quality return on results for users. We can balance national versus local as well because you are not reinforcing an echo chamber. You are showing them a more curated view of BBC content.

That is quite different from other products where they are driving clicks, so they are trying to show you more of the same thing.

“Removing any bias from the algorithm” sounds fine but showing them “a more curated view” doesn't. It sounds like Nanny BBC shepherding people away from what they'd like to see to what the BBC wants them to see.
The top comment at the Telegraph begins:

"Encouraging a wide range of content", or in other words shoving woke down your throat.

Given Storm's Twitter bio, with its pronouns and rainbow '/pride' emoji, that commenter might be onto something. 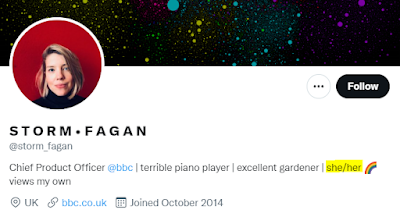 According to LinkedIn, she/her went to Combe Bank School, a girls-only private school in Kent where she was deputy head girl.

What really caught my attention though was her list of 'Influencers' on she/her LinkedIn page. Five people are listed, including the Labour Mayor of London Sadiq Khan.

Personally-speaking, I'd have removed that when joining the BBC if I'd have been her. It's a bit rum for a BBC boss to keep Sadiq as an 'Influencer' after joining the BBC.
Posted by Craig at 13:01