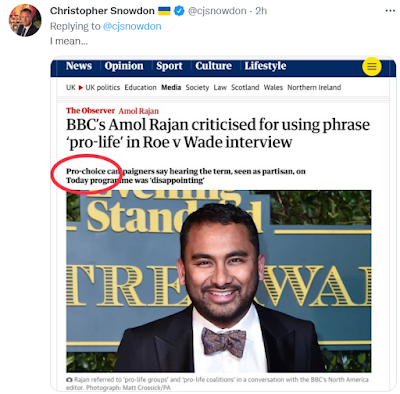 One of the BBC’s most high-profile presenters has been criticised for using the term “pro-life” to describe anti-abortion campaigners in a discussion about the US supreme court’s overturning of Roe v Wade.
The term, which is considered partisan, was used twice by Amol Rajan during Saturday morning’s Today programme on Radio 4, in segments about the landmark ruling ending Americans’ constitutional right to abortion.
The BBC News style guide advises journalists to “use anti-abortion rather than pro-life, except where it is part of the title of a group’s name”.

Now, a BBC reporter using the term 'pro-life' in the context of abortion is not what I'd expect, given the BBC's pronounced social-liberal bias, but Christopher Snowden of the free-market think tank the IEA makes an interesting point in response:

Both sides picked a name that makes their cause sound more appealing (pro-choice/pro-life) and everyone understands that. Unless this guy called the pro-choice people “pro-death”, I don’t see the problem.

And Christopher points out that the Guardian/Observer is mired in this language slough as well. See the image at the top of this very post for that tweet and his proof of that.

It's an interesting one. Though 'pro-abortion' and 'anti-abortion' aren't perfect terms, especially for some 'pro-abortion' people, they are understandable and not quite as loaded as 'pro-life' or 'pro-choice'. Maybe the BBC should stick to those?

From my own perspective, which I suppose I ought to put on record, I think our British compromise on the issue gets it about right - as BBC editors appearing on the BBC's Newswatch would say.

It is day two of those protests, not as many numbers as they were yesterday when that ruling came through but there are hundreds of protesters. I would say they are a largely pro-choice group. Earlier, there were anti-abortion protesters as well and there was a slight stand-off between them where you had pro-choice groups surrounding those anti-abortion ones and shouting, my body, my choice.