I've just been reading a Twitter thread by ex-BBC/ex-Channel 4 reporter Michael Crick:
Turning to the broadcast media, Sky News have a long, prominent report about it on their website's home page:

The BBC, in contrast, isn't presently reporting the story at all on their news website's home page. You have to go to their UK page to find it, and it's right at the very end of their long list of stories: 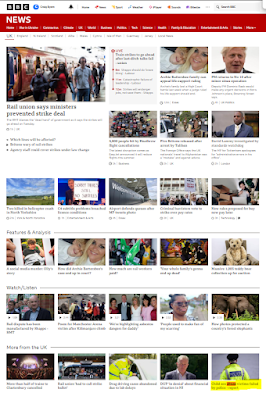 We're in very familiar territory here.
UPDATE
Newsniffer reveals an interesting series of edits to the BBC report.
Those of us who have monitored the BBC over the last decade and more used to comment on how the BBC, if forced to name the ethnic backgrounds of most of the perpetrators, would use the ambiguous, somewhat misleading term 'Asian/Asians'.
Later versions of today's BBC report note that the inquiry specifically called this out:

The report pointed out that while most arrests for child sex offences by GMP in the period between September 2009 and July 2010 then identified the alleged offenders as being Asian, they were likely to have generally related to British men of Pakistani or Bangladeshi heritage.

What is astonishing here is that the earliest versions of the BBC report show the BBC still doing precisely that, just as they always used to do - thus showing just the kind of mindset and massaging of language the inquiry criticised:

The independent inquiry was set up after allegations circulated on social media that Oldham Council was covering up what it knew about Asian grooming gangs in the town.

Then suddenly the BBC removed the word 'Asian' [click to enlarge]:

The article still had to go through a few more versions before they added 'the issue of grooming by "predominantly Pakistani offenders"' and removed the final use of 'Asian' in that old, familiar, misleading BBC kind of usage as...:

She went to Oldham police station to report being raped by an Asian man in October 2006 and was told to come back when she was "not drunk".

was edited and became:

She went to Oldham police station to report being sexually assaulted in October 2006 and was told to come back when she was "not drunk".

This was the moment they finally introduced the phrase "British men of Pakistani or Bangladeshi heritage" into the article when they quoted directly from the inquiry report criticising the use of the term 'Asian' and the lack of use of 'Pakistani' and 'Bangladeshi'.
So what we have here is truly remarkable: The BBC began by reporting this story in exactly the way the inquiry report criticised. Then they obviously panicked and began editing out 'Asian' and adding in 'Pakistani' and 'Bangladeshi'.
Thanks to Newsniffer though they've been caught in the act.
Posted by Craig at 16:28