Oh yes, I did watch Doctor Who on New Year's Day, and it featured a Dalek.

(Spoilers). The most terrifying creature in the universe was eventually defeated by a microwave oven and by the love of a dyspraxic son for his previously deadbeat Afro-Caribbean dad - the very same deadbeat Afro-Caribbean dad who'd earlier come up with the microwave oven idea and, thus, already saved Planet Earth - even before the heart-warming climax where his son (in return) saved him from the defeated but vengeful octopus-like naked Dalek. At which very point the anti-violence Doctor let the gobby Dalek piece of nude calamari fall into the Sun and die a horribly painful death.

I was at this point originally going to write:


No offence, but the writing by Chris Chibnall was so clunky that it almost feels insulting to the word 'clunky' to associate it with such, er, not-very-good writing. And, frankly, if the word 'clunky' wants to report me to the police for a hate crime here I'll fully understand.

But that would be far too rude to Chris, so I won't.

That said, it did feature this 'classic' piece of writing from Our Chris, after our Dalek friend had done something bad to the internet:

Who needs Ibsen, or Shakespeare, or Tom Stoppard, or Frank Muir and Denis Norden?

The Twitter reaction was overwhelmingly of the opinion that the whole thing was rubbish and a low point for Doctor Who - and, for once, the bulk of Twitter opinion was right.

One tweet that made me laugh came from Mark J Farnon:

Chris Chibnall: How about one turning people into mindless slaves, with a shell made of farm scrap, that can be almost destroyed by a microwave oven?

Meanwhile, even the Guardian, though broadly supportive, was wise to the programme's politicking:

So liberal-friendly has the show been, it was a surprise in this special that the Dalekian inner jelly didn’t turn out to be called Jacob Rees-Blob, or that when the extraterrestrial glop was enclosed in a plastic bag, it wasn’t the packaging that proved to be the biggest threat to the planet.

With 88 days to go until the UK is supposed to leave the EU, however, there was one pointed political reference. When the Doctor tried to call on the cross-border Unified Intelligence Taskforce to help save Sheffield from extermination, she learned that Britain was no longer a member after falling out with her “major international partners”. Another satirical gag was aimed at the cross-planetary force threatening to exterminate the BBC.

Ah but, Mark Lawson of the Guardian, hold you mouth! All of us, hold our mouths!

Yes, BBC Trending guru Mike Wendling sent out this highly characteristic, ultra-impartial tweet the other day to set you Mark, and all the rest of us mere mortals, straight on the matter: 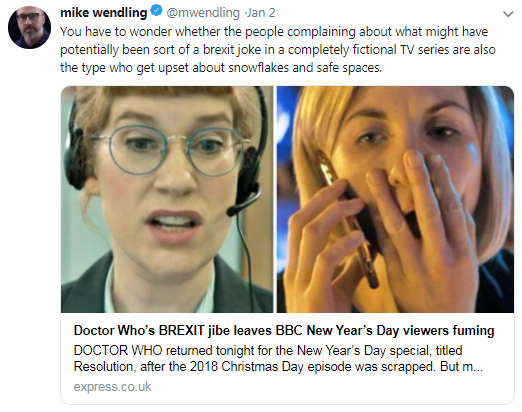 As our old friend D.B. replied, "Let me know when the BBC (paid for by threat of imprisonment using presumption of guilt) shoehorns anti-EU pro-Brexit propaganda into its drama output. I won't hold my breath."
Posted by Craig at 18:05