Things can only get worse (allegedly)

Catching up (and panting heavily), I see that the BBC received a walloping for another of their 'No Deal' tales: 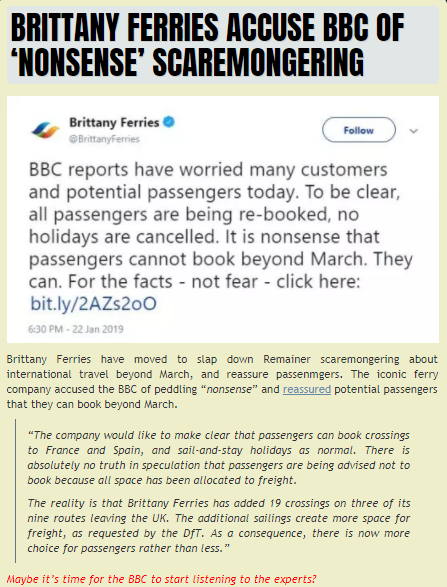 
I am beginning to wonder why I pay my licence fee when @BBCNews constantly gets it so wrong - surely not biased against us Leaving the EU!!!

As the fairest blog about BBC bias in the known universe and beyond (h/t Professor Brian Cox), I read, took on board and then gave the Stateroom to a reply to Kate saying that the BBC News website had reported the story fairly.

And I think that half-forgotten Twitter babbler had it pretty much right. Even a check on News Sniffer, confirms that the BBC News website reported it with some conscientious attention to fairness.

So what were Brittany Ferries, Stewart Jackson and Kate Hoey objecting to?

Well, unlike the BBC defender there, I've gone beyond the BBC website, and I'm pretty sure I know what they were specifically objecting to.

I think they all listened to Tuesday's The World at One.


Sarah Montague: Hello, and welcome to The World at One with me Sarah Montague. Preparations for a No Deal Brexit are beginning to bite as passengers ferries are re-scheduled to make way for medicine. We'll hear from a woman whose return journey from France was cancelled:

Vox Pop: I can't think of any other situation, as I say, with an advanced economy in the 21st Century where we would face this other than if we were on a war footing.

And the programme continued in that mongering-of-scares vein for several minutes later, without relenting.

A mixed picture maybe then, but Tuesday's The World at One was very Project Fear, and very BBC. And I'm sure it's this that Brittany Ferries recoiled from.
Posted by Craig at 21:10

Labels: 'The World At One'