I recently received an email from a reader who has battled the BBC's labyrinthine complaints process and won.

It took a lot of perseverance, including a long exchange of letters with the BBC and an escalation to Ofcom, but, finally, out of the blue, the BBC capitulated and conceded the point of the complaint.

So, if you're very patient and are prepared to jump through several BBC hoops, it can be done! 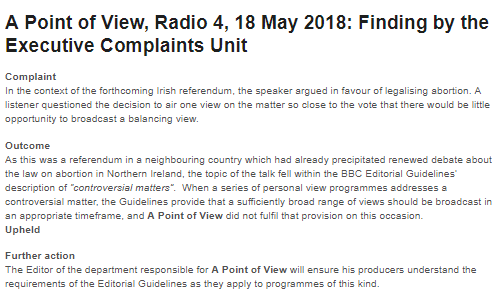 Indeed, here are a couple more recent examples. The first made me smile, as - like the above complaint - it obviously had to slog its way through the entire BBC complaints process to end up at the Executive Complaints Unit. I bet it took weeks, and yet all that was needed was for the BBC to acknowledge the error (a very basic error) and correct it. The wheels of the BBC complaints system grind very slowly at times:

And the next one, on a heavier subject, concerns a report from BBC Arabic's Nida Ibrahim:

You may also like to read some of the BBC's latest Corrections and Clarifications (the first of which should be familiar to you!):

A YouGov poll published on the day of the programme suggested a lead for the Conservatives but Diane Abbott was also right to say that some other polls suggested Labour either as ahead or tied, and we should have made that clear. We should normally report the findings of opinion polls in the context of trend and must always do so when reporting voting intention polls.

We said that “over the past few decades… four fifths of Iraq's Christians have fled or been killed; in Israel and the Palestinian territories, as those following other religions have grown sharply in number, the Christian population has shrunk.” In the region as a whole, numbers are certainly continuing to fall. But in recent times Israel’s Christian population has increased - for example, in 2017, by 2.2%.

The headlines reported the Prime Minister as saying that her plan was the only realistic one and the only way to avoid "crashing out" of the EU without a deal.
We should clarify this phrase was used in the debate by several MPs but not by the Prime Minister.

It was said on the programme that the EU Referendum of 2016 was "the biggest vote in our country’s history".
In 2016 33.57 million votes were cast, including rejected papers.
More votes were actually cast in the 1992 General Election - a total of 33.61 million.

In a report about African Penguins and why their numbers are in decline we said conservationists say their natural habitats are being hit by rising tides caused by climate change. While studies show climate change is having an impact on penguin numbers, it is because of rising sea temperatures affecting fish stocks, rather than rising sea levels. Other factors include commercial fishing practices, which are making it more difficult for African Penguins to find enough to eat and survive. We apologise for the error.

In a report on plans for a new Holocaust memorial in Westminster, we referred to Adampol as a ‘Polish labour camp’.
We regret any upset this resulted in - a clearer description should have been used, to explain that it was a Nazi German camp located in Poland.

In a report on the history of the European Union, we said 10 new countries joined the 12 countries already in the EU in 2004. In fact there were 15 existing members by 2004, as Sweden, Finland and Austria had all joined in 1995.

While visiting Sicily, it was stated that San Cataldo church in Palermo had previously been a Mosque. This was not accurate. The site of the Palermo Cathedral would have been a better example to choose to illustrate the diverse history of the city.
Posted by Craig at 15:46