In Praise of DB

Talking of DB (me and Sue's old blogging pal), he's on fire again at the moment, and his Twitter feed is a must - if you're into Twitter.

Here's a selection of his posts from the first three weeks of 2019: Hmm. Maria reminds me of another pro-EU Newsnight employee with a Polish-sounding name, Maya Rostowski. Maya's apparent heavy involvement in a report slagging off her pro-EU Polish politician dad's political opponents, the conservative Law and Justice, raised eyebrows - to put it mildly.

(In contrast, I thought this from Rod in this week's Spectator, on a related theme, was another gem from the former Today editor).

Nomia isn't new to us. She did a pro-hijab report for BBC One's news bulletins.

This preceded the previous example of the BBC leaping on an anti-Trump story from a major US mainstream media source and swallowing and regurgitating it hook, line and sinker (see next-to-last post). Here the BBC, making it their top News Website story, leaped on an anti-Trump Buzzfeed story that, like an insubstantial pageant, dissolved and appears to have left not a rack behind, leaving the BBC scrambling, discreetly, to bury its tracks.

(MB has been closely following this on the previous Open Thread).

And that 'gotcha' so excited the BBC that Reality Check generalissimo Chris Morris was wheeled in in to deliver the coup de grace to poor, babbling Boris.

Oddly, Chris's take (and other would-be 'reality checks' across the BBC, and elsewhere) piled on just three examples - two throwaway, somewhat ambiguous comments and one co-authored letter with Michael Gove and Gisela Stuart.

And that was pretty much it. Where was the long, damning list of quotes?

And, to me, this actually, accidentally, showed that Boris had, in reality, made next to nothing of the Turkish EU accession question in the run-up to the EU referendum.

But "latch on" and make "a huge gotcha moment" of it the BBC tried to do nonetheless.

This one was initially prompted by StewGreen:

Well done More or Less! The BBC's BBC Global Gender and Identity Correspondent (yes, really), to give her full official BBC title, certainly did get called out by Tim & Co, there. Ha ha.

For more on Megha from me and Sue, please click here. She's very BBC - not into Ivana Trump, a fan of Naomi Klein, someone who wants to explain explain arranged marriage "to white people", and someone who deleted a tweet damning pro-gay rights Ireland for backing Russia in the Eurovision Song Contest!

And, OMG, here's something about Katty: 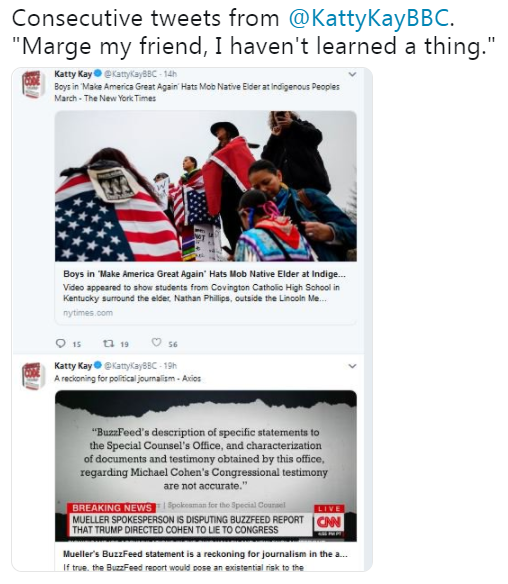 Yes, Katty actually just-about, in a roundabout, unspecific way, acknowledged that mainstream media types, leaped in too soon on the Buzzfeed Mueller story. but then - having, as DB noted, evidently learned nothing, was straight in their again on the Native American/MAGA-capped schoolboys media fiasco.

O wad some Power the giftie gie us
To see oursels as ithers see us!
It wad frae mony a blunder free us,
An' foolish notion.

Aye to that! Cue bagpipes...