Maybe, just maybe, it's time for an apology, before time runs out

As you probably know (and I know some of you do know), top 1% BBC star Gary Lineker got into a spot of bother on Twitter recently for tweeting a bit of false, anti-Brexit scaremongering: 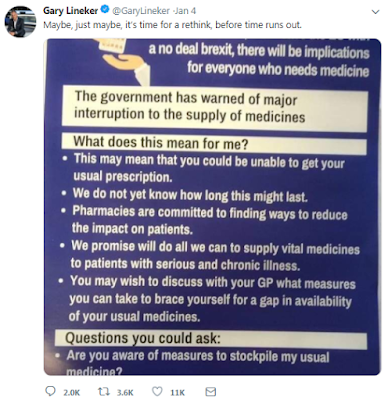 Weirdly, and to lots of consternation, Gary initially ignored the furore and the clamour for him to delete the tweet, until, late this afternoon, he finally deleted it.

He deleted it without posting any explanation why, and without apologising, and without acknowledging that he'd deleted the tweet or that there's been a furore about this tweet.

As the BBC, from the very top down, has recently given Gary - as a BBC Sports presenter - carte blanche to be as opinionated as he likes about politically controversial matters, given that he isn't part of the BBC's News and Current Affairs area, he's carrying on sounding off just as unimpartially as ever.

Still, shouldn't he have 'fessed up?

Whenever I've made major mistakes here at Is the BBC biased? I've felt it only right to confess and apologise without making excuses.

So why doesn't Gary Lineker just do the same? We all get things wrong after all.

Does he feel himself too important to apologise?