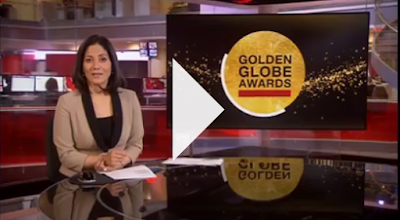 Last night's early evening news bulletin on BBC One was presented by Mishal Husain. At one point she said the following

The film and television awards season begins in Los Angeles tonight with the Golden Globes. This year women are being recognised in large numbers - hopefully signalling a shift in traditionally male dominated Hollywood.

As TrickCyclist said, "You keep your hopes to yourself, mate, and just read the news."
Posted by Craig at 17:34