This is another belated point I wanted to make back along, away from Brexit - (I wonder how many Tourettes sufferers have “Brexit” as a tic?) (If I had a tic, that would definitely be it.)

Stephen Daisley is a controversial writer. They say he’s a bit of a lefty, but since I gravitate selectively towards his Middle East pieces I have little to say about that. However, though he has produced some outstanding articles on I / P over the years, the one I read a couple of weeks ago seemed to me to be a bit of a curate’s egg. The real Racism Against the Palestinians. 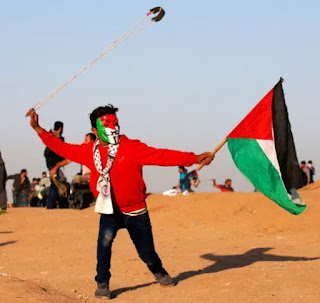 “I’ve always railed against liberal blindness and hypocrisy on Palestinian extremism as a product of anti-Israel bias. I’m not so sure anymore. I’m starting to wonder if the real bias is against the Palestinians.”

I wonder if Daisley just means the racism of low expectations. The racism of treating the Palestinians, or Palestinian society, as inferior; a biased value-judgement that assumes merely ‘being Palestinian’  inherently entails intellectual inferiority (to our own superiority.)

“Yes, Palestinian culture has a lot of work to do to catch up on democracy, human rights, minority rights, and much else besides. But none of this is inherent to being Palestinian; these are political and social values and they, and the cultures that espouse them, can change. This, however, is at odds with the underlying assumptions of Western policy on the Middle East in which Israeli misdeeds are aberrations to be condemned and corrected while Palestinian misdeeds are shrugged off, excused or justified. This is just who they are.”

That’s all well and good, but “the cultures that espouse them can change? Can they though? The missing piece of the jigsaw in this hypothesis is, obviously, Islam. That’s the spanner in the rather optimistic forecast that “things can change.” Islam isn’t going to change any time soon. It’s part of Islam's integral Mobius strip that says it can’t and won’t.

“The sentiment is sympathy but the logic is pure bigotry. We are not friends of the Palestinians. We are not lending them solidarity by indulging their outrages. We are treating them like a savage tribe from an Edgar Wallace adventure, benighted but noble in their own way, wide-eyed grateful to the white man for understanding their backwards customs. There is your racism.”

Along the way, Daisley cites two significant examples of the way in which Israeli and Palestinian societies differ.
1) The murderer of British student Hannah Bladon was given a lenient sentence by the Israeli court because he was seriously mentally ill.

2) The Palestinian court, however, also gave a lenient sentence to a Palestinian who was convicted of the heinous crime “attempting to sell land to a Jew”. He was sentenced to a lifetime of hard labour - apparently only avoiding the customary death sentence for that offence as he also holds US citizenship, and the state department is reportedly working to extradite him.

“If you get your news from the BBC, you might have missed this story, what with it not appearing to merit a single word on the corporation’s website. Happily, there was space on the Middle East page for a puff piece on Kholoud Nassar, ‘a Palestinian Instagrammer in the Gaza Strip [who] wants to show us a different side of life there’.”

Stephen Daisley knows perfectly well what’s behind it but he doesn’t say so explicitly. To do so would be judged inflammatory and Islamophobic.