Was this week's edition of Question Time (which, unusually, I watched - and, even more unusually, very much enjoyed), biased against Diane Abbott?

Senior Corbynistas around the Labour leadership are claiming so, and an aide to far-left Labour MP Chris Williamson, Jyoti Wilkinson, wrote the following (which is receiving wide coverage):

New presenter Fiona Bruce came out to address the audience.  Hailed for her performance from the week before by fans, and after happily approving of the sycophantic praise that she was being adorned with from some quarters, Bruce proceeded to warm up the crowd.  I am aware that this was indeed a tradition with former host David Dimbleby, and audience members were encouraged to participate as vocally and enthusiastically as possible.  Nothing wrong with that, an exercise in democracy it would seem.

However, it was at this moment in time that the real hostility towards Diane Abbott became evident.  Each panelist was given a brief bio; Rory Stewart – a member of the Government, Kirsty Blackman – SNP and a remainer, Isabel Oakershott – ardent brexiteer and Anand Menon – academic expert on the EU.

When Fiona Bruce introduced Diane Abbott, Labour’s Shadow Home Secretary, she took it upon herself to instigate a roast. Comments along the lines of ‘let her know what you really think’ and ‘some may think she is in the shadow cabinet because of her very close relationships with Corbyn, nudge nudge, wink wink’ were made.  This indeed had the desired effect, and the carefully selected audience guffawed in delight as they had now been given licence to air their bigoted views in public.  An audience member in a pinstripe suit commented “I’m going to ask her to do a sum, but she will just claim its discrimination I’m sure.” This level of deliberate antagonism from the BBC is a disgrace, and the institution now desperately needs to be held to account.

Now these terms were set, the now legitimised hostility became all too clear.  A brief practice session took place, where the most reactionary members of the audience were identified so that they could be returned to during the show.  Diane was given the cold shoulder as the other panelists chatted together chummily, and she was spoken over as if she did not exist.

During the debate, the Shadow Home Secretary was interrupted by Fiona Bruce more times in three minutes that the others were in twenty.  Audience members barracked and abused her, questioned her legitimacy and jeered, empowered by the licence they felt they had been granted by the BBC to do so.  Sympathisers such as myself were simply ignored.  At one-point Fiona Bruce and Isabel Oakeshott ganged up like playground bullies to ridicule Diane Abbott over Labour’s polling, both making statements later proven to be false.

BBC’s Question time is portrayed as a truly democratic spectacle, where the public can engage members of the Government and Opposition, as well as leaders of their field.  In reality, it is far from it.  It is a farcical stage-managed state propaganda tool in which the BBC use and legitimise institutional racism, misogyny and bigotry to stoke up reactionary sentiment amongst the general population.  At the very least the BBC needs to be reformed and we must build a new media.  This cannot be done soon enough.

So did Fiona Bruce single out Diane Abbott for mockery before the show began? Well, we mightn't be entirely inclined to believe a partisan aide to Chris Williamson, but another member of the audience has supported Jyoti's claim that there "was some humour at Diane's expense from BBC staff before the recording", while yet another said that "Fiona Bruce basically made fun of Dianne (sic) Abott (sic) in the briefing before it aired". 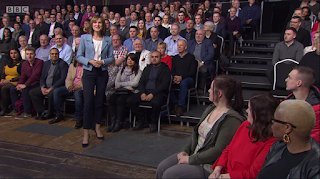 I'm assuming these widely-quoted claims are the ones the BBC is referring to when it talks of "reports circulating on social media" that are "inaccurate and misleading", continuing:

We firmly reject claims that any of the panel was treated unfairly either before or during the recording.

We can't be sure who's got it right here not having been there and not having seen the before-the-recording goings-on, and we can never be sure unless a (covert) recording emerging of it, but we can judge the claims about how Ms Abbott was treated during the programme itself.

Was Jyoti Wilkinson - as well as an oft-quoted Labour spokesperson - correct to say that she was interrupted by Fiona Bruce significantly more than the other panelists? Well, yes. By my reckoning, overall, Diane Abbott was interrupted 17 times, whereas Rory Stewart was interrupted 10 times and the SNP's Kirsty Blackman 6 times (with the two non-politicians being interrupted even fewer times).

As to his specific point that "during the debate, the Shadow Home Secretary was interrupted by Fiona Bruce more times in three minutes that the others were in twenty", clearly alluding to the opening 25 minutes of the programme, well, yes, that's an exaggeration but not too much of an exaggeration. I make it 9 interruptions for Diane Abbott and 15 interruptions in total for the rest of the panel during that time.

As for mockery during the debate, well again, yes, I do think that Diane Abbott got least respect from Fiona Bruce this week. My favourite jibe was this one:


Jeremy Corbyn sometimes says you have to talk to people with whom you profoundly disagree. He was talking about Hizbollah and Hamas. [Audience, panel laughter. Strong applause]. Theresa May?

But when Jyoti says that "at one-point Fiona Bruce and Isabel Oakeshott ganged up like playground bullies to ridicule Diane Abbott over Labour’s polling, both making statements later proven to be false", is he right (about the statements)? Well, yes, he is correct that both ladies did indeed make statements later proven to be false. These concerned the polls, and Isabel Oakeshott's claim that Labour was way behind in the polls - a claim Fiona Bruce echoed (including adding a "Definitely".) But of the latest ten polls 4 show a Conservative lead, 3 a Labour lead and 3 a tie, so - despite what Fiona Bruce said - there's no "definitely" whatsoever about the Labour Party being way behind in the polls. Note, however, that Isabel also talked about the Labour leader being way behind in the polls, and about that she's right. 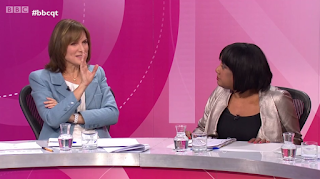 More generally, was the audience biased? Well, despite having Labour Party activists (like Jyoti) in the audience, the bulk of the audience did seem - to the amazement of many Leave-supporting viewers! - to be strongly pro-Leave, and strongly pro-'No Deal' (giving that idea a HUGE cheer). Was it because they were the bulk of the audience, or only the most vocal part of it? Well, it did look as well as sound like the majority of the Derby audience to me - though there were plenty of exceptions. And, yes, Diane Abbott was their main target for booing, heckling and jeering.

As far as Brexit goes, was the panel biased? Isabel herself tweeted "Am I the only Brexiteer?" accompanied by "#prayforIsabel". Was she? Well, yes, if you mean a committed Leave voter who doesn't outright reject 'No Deal'. An audience member, however, took what might be called 'The Rob Burley Line' on this, quoting her tweet and telling her to look to two of the people sitting next to her - namely Rory Stewart and Diane Abbott, both of whom speak (in their different ways) of honouring the referendum result and being committed to us Brexiting (in some way or another, to some degree or another). I'll let you judge the truth of that particular 'line' for yourself.

As for whether the BBC "whipped" up a "hostile atmosphere" towards Diane Abbott because she's "a black woman" or was guilty of "legitimising racism" (as Labour MP Barbara Keeley put it), well, I don't think the BBC could ever be accused of intending that.

There are other reasons to jeer and heckle at Diane Abbott, especially after she opens her mouth.

P.S. Away from all of this, Question Time had an "expert" on - our old friend Anand Menon - who Fiona Bruce treated in the usual BBC way. I appreciated his take on a second referendum, so I thought I'd share it will you (just in case this post wasn't already more than long enough):

It might well be that another referendum - I can't stand the phrase People's Vote I afraid - ends up being the only way forward. And I don't think it's anti-democratic. If Parliament legislates for something, that's democratic under our system. But I think you've just got to be honest about how hard and how divisive it would be. 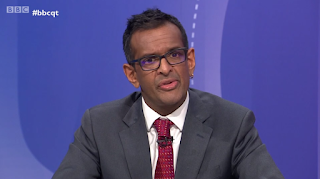 And it would be massively divisive. Because whatever else you think about the referendum of 2016, it was a remarkable moment in our democratic history that mobilised people who either haven't voted or haven't voted for a long time and I think those people would, with some reason, feel a little bit hacked off that they were asked to do it again.

And the final question I suppose is, would it definitely fix things? And there I'm a little bit uncertain because if you imagine we had another referendum, imagine we got to the stage were Parliament couldn't decide and we defaulted somehow to another referendum and we ended up with the result that was 52-48 the other way on a smaller turnout than 2016, with fewer than 17 million people voting Remain? Would that settle the question? No.