The early morning news (Radio 4) gave a serious warning. What about? You ask.

“The "febrile" atmosphere around Brexit could be exploited by far-right extremists, the UK's most senior counter-terrorism officer has warned.”

Who is this most senior counter-terrorism ocifer? one wonders. 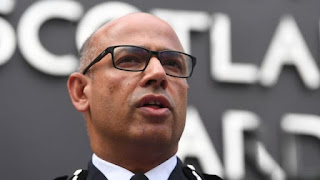 Assistant Commissioner Neil Basu is he. “It’s something to do with a ‘no deal Brexit’” he claims, enigmatically. How so? We’ll have to take his word for it for now.

“while extreme right-wing activity was still a "relatively small threat", it was also "something we've got to pay very close attention to in this country - that we don't let that kind of far-right drift into extreme right-wing terrorism and we're working very hard to stop that”.

"We saw a spike in hate crime after the referendum, that's never really receded.”[…]”So there's always a possibility people are being radicalised by the kind of febrile atmosphere we've got at the moment.”

What, you mean “Poles go home?” that sort of thing? I thought that had been debunked. But perhaps not.

I clicked on a linked-to web page. At first, it appeared to be just the BBC's customary virtue signalling. I was completely taken in!  I really thought it was meant to be sinister and ominous….. unless (it suddenly occurred to me) it’s a parody. Yes, that must be it.  How gullible am I, thinking it was a simple tale of “Bad goes ‘Good’ And Learns Error of Ways”. Silly me. I’m a silly son of a gun. I work eight hours I sleep eight hours I that leaves eight hours for blogging.

A fine example of deadpan comedy that video is too. Unfortunately, Blogger won't let me embed it.

”At the time I shared a lot of material on social media.”

“ I did say Islam was a plague, and much like the plague, we have to get rid of it”

he continued. Of course, you don’t get to see John’s face, or you’d twig it was Paul Whitehouse or someone, but you do get to see the interviewee nodding sympathetically and hamming it up with a somewhat overstated ‘worried’ expression; very like Victoria Derbyshire and quite amusing.

Anyway, “John” has learned his lesson after being kicked out of a classroom for answering a trick question in an offensive, right-wing manner.

The teacher, very likely an undercover agent from the Prevent squad, (as teachers are, these days) had asked: “Why do people emigrate (sic) to Britain?”  “Because of the benefits”, he replied, falling into her trap and, inadvertently revealing the true extent of his deluded, far-right mindset.

By now I was getting into the spirit of it,  and it somehow reminded me of Blackadder and Baldric.
By the end, everyone had learned their lesson and lived happily ever after. (unlike Baldric who turned into the un-amusing Tony Robinson)

So I think it’s time we had a clear definition of the term "far-right", BBC style.  By Jove, I think it’s anyone who is worried about the rise of Islam. That includes me!

I wonder when the terms far-right, and to a lesser extent 'right-wing' morphed from the traditional meaning: antisemitic, homophobic, sexually repressed, hard-hearted, intolerant, short-back-and-sides, ‘get yer haircut!' men who never cry, and think a woman’s pace is in the kitchen, and transformed into 'anyone to the right of Jeremy Corbyn who happens to worry about the rise of Islam'.

The following question occurred  to me while I was in the bath:
How come a huge organisation largely staffed by atheist or lapsed Christian, gay, liberal, pacifist-inclined, university educated, progressives and would-be creatives, strives so very hard to normalise the customs, rituals and practices of the followers of a medieval, homophobic, antisemitic, warmonger whose pseudo-biblical salad of contradictory religious dogma is believed to be the direct word of God, from which any part can be cherry-picked to ratify a cornucopia of homophobic, antisemitic, illiberal and murderous activities? Long sentence, but there you are.

I tried to imagine a kind of Venn diagram, where things like antisemitism and homophobia overlap. Right, Left, Religion, BBC, etc., but by then I’d turned into a prune. Not a good look. I don’t think I’m likely to drift into extreme far-right terrorism at the moment.