A Spot of bother

I might as well mention the edition of HardTalk featuring Lord Patten, Chairman of the BBC Trust. His interrogator was Stephen Sackur. This programme sets out, per se, to give the interviewee a hard time so no use complaining when the going gets tough. In any case, Chris Patten could do with a good grilling because of his failure to wisely guide the BBC  through its recent tribulations; oh yes, and a couple of his biases.

The issue here is not that Sackur did his browbeating too well, or too badly. It’s about the fact that amongst BBC types it’s a given that being pro-Israel is a deviation, like paedophillia, or whatever super-aberration du jour automatically renders one subhuman.
The new head of News at the BBC, James Harding, has been outed. The admission that once upon a time, in a former incarnation (at the Times) he suffered from a debilitating affliction has been deliberated over by concerned individuals throughout the land. Why? As a potential impediment to his suitability, that’s why. What? Oh, he said he was pro Israel.

“I am pro-Israel and I haven’t found it hard because The Times has been pro-Israel for a very long time” quoth Sackur to Patten accusingly, which is HardTalk for you’ve irresponsibly appointed a monster who’s bound to contaminate the news with objectionable pro Israel views. “He won’t have changed his spots” declared Sackur.
“Are you comfortable for him to pronounce himself pro-Israel as head of news of the BBC?” He asks again. (That’s HardTalk for “You look like the smug, comfortable toad you actually are and you should be very uncomfortable indeed.”)

Patten has widely-known pro-Palestinian ‘history’, which he himself cites in order to evince a shining example of personal integrity triumphing over personal opinion, throwing in his Conservative party credentials for good measure. Sackur isn’t having any of it. “You’re not head of BBC News and you never have been.” he counters, quick as lightening.“No, but I’m chair of the BBC Trust.” comes the reposte. But Sackur persists:

“James Harding is self-declared pro-Israel. Do you have any problem with that? Do you think that it might create problems for you and for the BBC when one considers that perhaps the most contentious issue we all in BBC news and current affairs have to deal with on a daily basis is reporting the Middle East?”

Obviously Sackur assumes that being pro-Israel disqualifies one from being  a reasonable person, merely because the default BBC position is “anti”. But here’s the rub. Why would the viewer be convinced that the BBC’s multitudes of 'antis' have the mental agility to put their personal feelings to one side and adopt professional impartiality on air, while one solitary 'pro' would be incapable of doing so?  Should the ideal BBC employee be scrupulously ‘of no opinion’ like an automaton, to ensure that he doesn’t skew the news in the wrong direction, or must he sign up to the official anti-Israel party line before temporarily casting it to one side the minute he puts on his BBC hat?

"HARDtalk isn’t about shouting, or point-scoring. It's about asking the intelligent questions our audience would be asking if they had the chance to sit in the HARDtalk chair."

But Tweets concerning a particularly hectoring HardTalk encounter with “settler leader” Dani Dayan at the time when the BBC was rife with off-beam predictions about the Israeli elections suggest these principles have been forgotten. 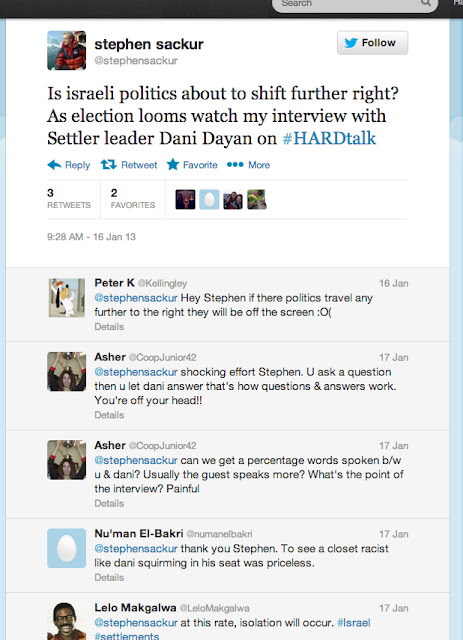 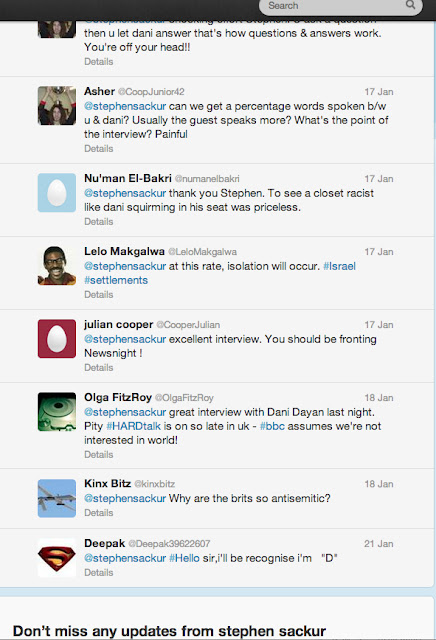 Sackur may well be as unbiased as the next man and Lord Patten may have put his Arabist tendencies firmly behind him when he took up the chair of the BBC trust. That’s what we’re expected to believe is it not?  So why can’t James Harding?

As David Preiser says over at B-BBC:

And that leads us to the Twitter question. Is the disclaimer “my views are my own” which must be attached to all BBC Tweets as meaningless to Sackur as it is to everyone else?  Or are left-wing, pro-Palestinian spots as indelible as James Harding’s and if so is Sackur comfortable with that?

But here’s the other rub. What exactly is wrong with being pro-Israel? It’s only organisations like the BBC and the Guardian that have turned this into something devilish. Being pro Israel means you support Israel’s existence as a Jewish state. It’s geographically tiny and civilizationally gigantic. What’s not to like?