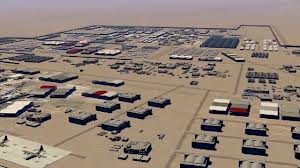 As the previous post suggests, the BBC has been leading all day with the story of the Afghan 'insurgents' being detained by British forces at Camp Bastion, our largest base in Afghanistan.

The BBC began the day by saying it had "seen legal documents" which lawyers acting for the detainees claim "could amount to unlawful detention", and which those self-same lawyers have been trying to compare to Guantanamo Bay.

I could be wrong but the use of the passive tense by the BBC suggests to me that the corporation "saw" those legal documents thanks to those very lawyers giving them to them. The lawyers in question are are campaigning to free several dozen Afghans, all of whom are suspected of being of being actively involved with the Taleban and, thus, of posing a very real danger to our troops; some, indeed, of being directly responsible to the killing of British soldiers). Were it to be the case that the BBC "obtained" these legal documents from those lawyers it would show the corporation being extremely helpful to a campaign, especially were they to report it heavily.

And report it heavily they most certainly did.

It was the main story on Today, whose angle on the story tallied closely with that of the lawyers:

Documents obtained by the BBC suggest British forces are detaining Afghan nationals at Camp Bastion in what could amount to unlawful detention.

Likewise, 5Live has been running with it heavily too:


The BBC World Service has also been 'airing our dirty washing in public' (so to speak) to the entire world:


...and the BBC News website has been full of items on the story today:


You may say this is a scoop for the BBC, and they are right to go with it.

That may well be, though it wouldn't be much of a scoop, would it, if it has merely been handed to them on a plate by some campaigning lawyers; indeed, that would look pretty bad. It would look as if they were acting as a mouthpiece for these campaigning lawyers. I would not be happy with that - were it to turn out to be the case.

The main report on the website, by Dominic Casciani and Clive Coleman, was - most usually - open for comments. Unfortunately for the BBC, the comments didn't go their way, and after a mere seven comments they 'closed' them down.

I think you can see why:

Except for the first comment there, those comments reflect what I suspect many a BBC reader, viewer and listener must have been thinking today.

They suggest a number of things that bother many critics of the BBC - the idea that the BBC is unpatriotic, that it undermines our troops and our war effort, that it gives an over-sympathetic ear to our enemies, that it is over-sensitive to the rights of Muslim terrorists and the views of left-wing campaigners and, above all, that it doesn't care anywhere near enough for the safety of British soldiers - many of whose lives may be endangered by these very men after their release and who might now be facing a savage backlash as a result of today's negative reporting (and we're all now painfully aware how real that danger is).

The BBC that broadcast Frankie’s Story and The Undercover Soldier to the horror of many in the army, has form here, some might well say.

The question you sometimes see on websites, summing this up, is "Whose side is the BBC on?"

The BBC would surely say it's trying to be on no one's side, merely to report the news impartially.

Many people are uncomfortable with the BBC adopting such a position when British forces are involved in an armed conflict.

If you've not been following the story, the MoD has argued that the number of detainees is higher than usual only because of difficulties in handed them over to the Afghan authorities and that the number is usually closer to 20 people. Fears for the mistreatment of prisoners by the Afghan authorities led to the transfer process being put on hold. The MoD also rubbishes the lawyers' claim that Camp Bastion is a "secret facility". The Defence Secretary had already informed parliament about the detentions. He has also reaffirmed they were vital to the protection of our troops.

The New York Times provides a noticeably more sympathetic account of the British position than the British Broadcasting Corporation's account, noting in the light of Philip Hammond's comments:

That is a similar point posed by American officials involved in long negotiations with the Afghan government over the transfer of Afghan detainees out of the American detention center at the Bagram Air Base, north of Kabul. The issue became a major sticking point in recent months after several failed attempts to hand over control of the prison, with Mr. Karzai demanding immediate and full Afghan sovereignty over the prison and American officials seeking to ensure that hardened militant leaders would not be immediately released back onto the battlefield.

The BBC article features, on the other hand, contains such things as this:

Was the word "father" really necessary in that sentence? Why was it included? To show "the humanity of the Taleban" (as Lyse Doucet might say) and tug at the heart-strings a little?

I haven't listened closely to today's coverage on Radio 4 yet. That will have to wait for another day.
Posted by Craig at 23:22