When they call upon the expertise of someone like Abdel Bari Atwan or Ghastly Karma of Exeter Islamic university, the BBC ought to issue a warning, out of consideration for the unwary listener if such an individual still remains. It’s  a matter of public service and good will. Just a little health warning, like on cigarette packaging, or at the very least, a plain wrapper. Just, please don’t introduce them with the sycophantic classification “expert on, for example, the Middle East”. Please.

As Craig mentioned earlier, and while we’re still talking of conspiracy theories, Saturday’s Today programme called in a guest expert named Annie Machon who cries out for a label.
“I’m a former spy!” She might (or might not) cry. Or perhaps: “A Truther who believes Zionists were behind 9/11” But no. She was introduced by John Humphrys as a former MI5 officer and author of a book ”Spies, lies and whistleblowers”, which I won’t advertise again. 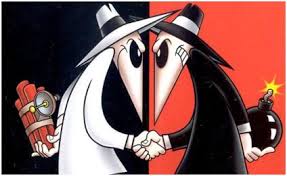 She was invited to opine knowledgeably upon the poisoning of former KGB spy Alexander Litvinenko, and got audibly excited on the subject of gaggings, stiflings of information, secret deals, the shortcomings of the intelligence services and the government, with a small grievance about human rights abuses thrown in for good measure.
She sounded knowledgeable indeed -  plausible even, that is until you take the trouble to ferret out her erratic and bizarre past.

She’s a truther and conspiracy theorist, obsessed with ‘false flag’ operations, and to top it off, she’s considerably economical with the actualité.
Being introduced as an expert on spies and lies is okay as far as it goes, but it doesn’t give a clear picture. Fortunately Youtube has a plethora of clips that fill in the gaps.

Apart from her punctiliously precise enunciation - so provocative you can’t help wanting to smack her in the chops, Ms. Machon bears an uncanny similarity to Mary Beard. Well, in a hidden dimensional back-to-the-future kind of way.

Machon’s fame came about because of her relationship with her former colleague and partner, the notorious whistleblower David Shayler. The gruesome twosome agreed that Zionists were responsible for 9/11, but he alone later announced that he was the Messiah,  which might give some indication as to his mental condition.
Perhaps that’s why she didn’t boast about their former relationship when mentioning him on the Today programme.

In one clip she can be seen insisting she was an intelligence officer, not a spy; on another she proudly boasts “I started out as a spy”, all the better to impress the audience who had come to listen to the Professor of Conspiracy Theories whose  lecture she was introducing, entitled “9/11 Time For a Second Look”, David Ray Griffin.

Bravo Prof! Your preamble is fascinating and most persuasive. It goes something like this:

“People who decided long ago that the attack happened essentially the way the Bush Cheney administration said it happened, and decided that the truth movement are all crazy conspiracy theorists with no capacity to evaluate these theories objectively must take another look.
Most of them, and most journalists, have been impervious to counter-arguments, and simply roll their eyes. Available evidence means it’s no longer rational to reject these moves out of hand without taking a second look.
If you too roll your eyes you are guilty of the same irrationality of which you accuse us.”

That “Time for a second look” argument, that “don’t dismiss us with those rolling eyes” plea
holds good for supporters of other unpopular causes too, my good friend, as well as apologists for Islam like you and Annie Machon who are too blind to see that that is all you are. False-flag operations are but a gnat on the arse of the elephant, which represents the creeping Islamisation of the whole wide world. If you watched yesterday’s Unreported World on Channel four, which was about a women’s driving school in Bangladesh, you would have noticed a terrifying lock-down whereby a mob of Islamist thugs were given freedom of the streets to “protest”; a roaring, baying mass, against what? Against bleeding well everything - whilst everyone else cowered in terror.

Look at  Iraq, Iran, Gaza, Egypt, much of Africa, Pakistan and Syria - and eat your heart out. (Sorry)
Not to mention Rochdale, Oxford, and all the rest of the UK problem areas where blind eyes are turned more often than they’re rolled.
Whilst Annie Machon is presented in a plain, unlabeled wrapper and given air time to bleat about false flag operations and breaches of human rights the BBC and most of the press is fretting about a mysterious reference to swivel-eyed loons. They wouldn’t know a swivel-eyed loon if they caught one opining on the Today programme.

Craig: Well, Sue, as we both know, Hadar at BBC Watch is fond of quoting clause 4.4.14 of the BBC Editorial Guidelines on impartiality whenever the BBC fails to honour it. I think we can follow suit here:


We should not automatically assume that contributors from other organisations (such as academics, journalists, researchers and representatives of charities) are unbiased and we may need to make it clear to the audience when contributors are associated with a particular viewpoint, if it is not apparent from their contribution or from the context in which their contribution is made.