Pieless in Gaza, at the stove with Yolande 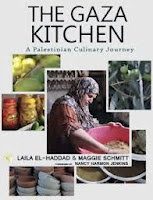 Hadar at CiF Watch posted a piece about an article from the Guardian's Harriet Sherwood which plugged a book about gastronomy in Gaza by Laila el-Haddad and Maggie Schmitt called The Gaza Kitchen. Laila el-Haddad, a CiF contributor in the past, is no mere cook book writer; she's also a Palestinian activist who advocates a 'one-state' solution to the Israel-Palestinian conflict - i.e. the dissolution of the State of Israel - and whose book doesn't steer away from a (loaded) take on the political context.

Inevitably, the BBC also plugged the same book. Monday night's P.M. featured a report about it, but that edition of the programme has (for some reason) never been available to re-listen to since its broadcast (which is very unusual for editions of P.M.)

Still, the very same report, by Yolande Knell, can still be heard, via the World Service's listen-again function. You can hear it here (beginning 18 minutes in).

My summary of the report:
A woman in a "refugee camp" takes pride in her Gazan recipes.
As most of the population of Gaza are  the descendants of "refugees" from "historic Palestine", they have brought in many influences.
The book is duly plugged and the co-author Laila el-Haddad is interviewed.
Gas shortages in Gaza.
Israel's blockade. Its effect? "Most exports are still banned. That's hit industry hard and kept unemployment and poverty high."
An economist, Omar Shaban, talks of that poverty and the fall in the quality of food Gazans can eat. It's not like it "was before", he keeps saying, sadly.
Still, there's "a generous spread" at the woman's "cramped" home.
Gazans are so "inventive" and "exuberant" and, says Yolande, ending her report, "and they have plenty of tasty offerings that should appeal to Western appetites."

Nothing BDS-like about that appeal from the BBC's Yolande Knell to her Western listeners: Buy Gazan food! - and buy this book!

Has any book about Israel's gastronomical delights been plugged by the BBC recently? Have the exuberant cooks of Israel been presented in such glowing terms by either Yolande or her many colleagues in the Middle East? Or is Israel only fit to be the bad guy in sob stories about plucky Palestinians?
Posted by Craig at 20:43