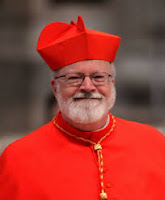 An amusing turn of events on this morning's edition of Radio 4's Sunday came when Edward Stourton interviewed Michael Sean Winters over the plans of Cardinal Sean O'Malley, Archbishop of Boston, to boycott Boston College's commencement ceremony given that Irish Prime Minister Enda Kenny is due to speak at the event and that Cardinal O'Malley believes Mr Kenny to be "aggressively promoting abortion policy".

This is the type of feature on Sunday where a pronounced bias on the programme's part against social conservatism tends to emerge, so I was hardly surprised when Edward introduced Mr Winters as being a contributor to The Tablet (the liberal British Catholic magazine of which Edward himself is a trustee) and the National Catholic Reporter (the liberal American Catholic newspaper). Mr Winters's Wikipedia entry says:

He has often written from the perspective of progressive Christianity, opposing various conservative elements within the Catholic Church on topics such as the politics of abortion or the ordination of gay priests.

A sense of impending bias in the programme's choice of interviewee was, I hope you will agree, hardly an unreasonable feeling to have at this point in the interview.

I assumed, as a result, that the interview would then also take the familiar Sunday course of a Tablet in-house discussion, with Edward and Mr Winters chatting and Mr Winters providing the views that go hand-in-hand with the expectations loaded into Edward's questions, all leading to the inevitable conclusion that Cardinal O'Malley is wrong and Mr Kenny is right. From the way the interview started, I have a sense that Edward expected that too.

Mr Winters, however, turned out not to hold the expected point of view at all. He's on Cardinal O'Malley's side here and sharply critical of Enda Kenny's position on abortion. Edward sounded rather taken aback by this turn of events - as was I. (Unlike Edward though, I started laughing).

Edward Stourton's question was a loaded one:

As I understand it, what the Irish government is trying to do is to tidy up the law in the light of the public sympathy for this young woman who recently died because she didn't have...or wasn't allowed an abortion. The cardinal has described that as "aggressively promoting abortion legislation". Do you think that's fair?

Unfortunately for Edward, Mr Winters didn't see what the Irish government is doing in the same way that he does, describing what Edward had just said as "simply factually wrong", saying that the lady died from medical malpractice and that the law Enda Kenny is proposing permits direct abortion, which is unacceptable for the Church.

Edward stuck to his position though, insisting (with the use of such loaded terms "very modest" and "extreme"):

It's a very modest change, certainly it wouldn't introduce the sort of abortion legislation that we have in this country and many states in the United States. Describing it as "aggressively promoting abortion" seems a little bit extreme.

Mr Winters insisted, in turn, that it's crossing the Rubicon where you can intend to take an innocent human life, and it's analogous to the idea of it being impossible to be "a little bit pregnant". He expressed his admiration for Cardinal O'Malley and the Irish bishops for saying "no".

So, whatever the intentions behind to decision to invite a fellow Tablet liberal Catholic to talk about this issue, the result turned out to be far more impartial than might have been expected. Edward put the liberal perspective and the Irish government's position, while Michael Sean Winters put the traditional side of the argument and backed Cardinal O'Malley. Just as it should be.
Posted by Craig at 10:19