This week's Newswatch with Samira Ahmed discussed the BBC's coverage of the Oxford street grooming case. In the course of the programme Samira interviewed the head of the BBC newsroom, Mary Hockaday.

The section began with an extract from last Tuesday's Six O'Clock News on BBC One:

Newsreader: The court heard how the girls were plied with alcohol and drugs before being abused. The men will be sentenced next month. Just to warn you, Tom Symond's report contains disturbing details of the gang's activities.

Reporter: The men behind one of the most serious cases in recent years of what's become known as "street grooming. Their victims vulnerable young teenage girls in Oxford.

The majority of Newswatch correspondents complained that the Muslim or "Asian" element was being "underplayed". Three such complaints were read out.

- "This huge story is being slanted quite outrageously by BBC News. This is racially organised targeting of sexual violence on minors, and is far from an isolated case. You are deliberately ignoring that and being racist is your partiality."

- "Why do you never mention the religion of those mentioned in sexual abuse cases? We all know they are predominantly Muslim."


The part of the interview with Mary Hockaday which dealt with this matter is worth transcribing (before Newswatch vanishes from the i-Player), especially in the light of our earlier posts on this issue - and the comments of Dr. Taj Hargey:

Samira Ahmed: The six o'clock lead story, which we showed a clip of at the beginning there...no mention of ethnicity or religion until the end of the second background package, eight minutes in; in fact no mention at all of the fact they were Muslim. Why?

Mary Hockaday: This was reporting of a court case and, primarily, the task was to report the findings, the verdicts and what had happened, and for much of our reporting and our court reporting we were conveying the details and the information of what had emerged through the trial and then particularly on that day. Part of it is, as you say, in our reporting with Alison Holt, we did come to the issue of the ethnicity of the defendants...

Samira Ahmed (interrupting): It was mentioned very, very briefly, right at the very end. I mean, there have been five similar cases now - Shropshire, Rochdale, Rotherham, Oldham and Derby as well...there's a great blog-post by Mark Easton about it on the BBC website...The charge is that the BBC seemed to be more worried about offending Pakistani Muslims that it did about covering all the issues - and it was relevant to the case.

Mary Hockaday: Yes, I can absolutely assure you that was not our particular concern on that day. We certainly do not attempt to slant our coverage and we certainly don't ignore any aspects of the case. What we're trying to do is report it in the round, and actually during the court case the word used usually by the police was "Asian". We undertook to make our own further enquiries so that we were sure about the more detailed ethnicity of the defendants and that is something - many of Pakistan heritage, some of North African - that we included in our reporting through the day on the channel. We discuss all stories, both about the accuracy, the weight, the issues arisen, and in these cases very much about the language used.... 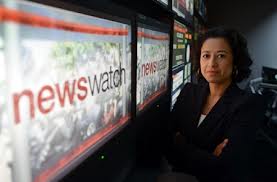 Samira Ahmed (interrupting): But on this, were reporters told "Don't use the word 'Muslim' or don't say they're Asian up front. I mean...

Mary Hockaday: We don't tell our reporters. We don't give them a sort of rule book for language. We are asking them to report accurately. If you look at the reporting as a whole, both on the Six O'Clock News then on all the other outlets, these are not issues that we shied away from. I mean, as you say...

Samira Ahmed (interrupting): But on the Six O'Clock News you did.

Mary Hockaday: ...Mark Easton in his blog and also on air, Alison Holt, in many of the guests in discussions, the issues you've touched on, but also others - the questions for the police, for the social services, the broader question I think for all of us that we see reflected in the very many different kinds of child abuse and exploitation cases that we found ourselves reporting on, about how this society does or doesn't listen to children.

That was an instance of fine interviewing by Samira.

It has to be said, however, that the edition of the Six O'Clock News under discussion does sound to have downplayed the sectarian element in the story. The evidence provided by Samira makes that plain and little that Mary Hockaday said in response really countered that charge. She was also rather evasive about the "Muslim question".

I did also raise an eyebrow at Mary's contention that "We don't tell our reporters. We don't give them a sort of rule book for language" as I was under the impression that certain words were specifically discouraged under the corporation's Editorial Guidelines - "terrorist", for instance - and that, say for their Israel-Palestinian coverage, they has long existing what could be described as "a sort of rule book for language".

Was the Six O'Clock News an exception?

It might be instructive to check out how that evening's P.M. on Radio 4 one hour earlier dealt with the story.

Although both of the introductions provided by Carolyn Quinn (to the whole programme and to Mike Sargeant's report) shied away from any mention of matter racial or religious, the coverage did twice mention the Pakistani and North African ethnicity of the abusers (in passing), though Mike Sergeant didn't mention the ethnicity of their victims anywhere in his report; indeed, his report stayed away from any ethnic or Muslim angle until, towards the end, he suddenly said that there are "questions for the Muslim community". He didn't spell out what those questions were though, and then featured an Oxford imam saying that enough's enough, that the community should tackle the issue and it shouldn't be swept under the carpet. Listeners unfamiliar with the story might have been left wondering why the imam was saying that. The following interview between Carolyn and Natasha Finlayson of the Who Cares Trust avoided such issues altogether.

So, unlike the Six O'Clock News, the "Muslim" issue was raised on P.M., albeit very briefly and with no context being give for the benefit of Radio 4 listeners. The angle, therefore, wasn't ignored but it clearly was downplayed.

By the time of that night's The World Tonight the main news bulletin was informing listeners of the Pakistani and North African ethnicity of the abusers and that "the girls were white". The failure of the authorities to look out for vulnerable girls was one of the two main angles, with the county council's role coming in for the strongest questioning but presenter David Eades then laid out the other - albeit using the "Asian" word that infuriates so many, including many non-Muslim Asians:

The inescapable truths of this case are twofold: That again the authorities failed to protect vulnerable girls and again that a gang overwhelmingly of Asian men were found guilty of appalling abuse of white girls. The echoes of Rochdale and Rotherham are clear. It's also clear the local Asian community in the Oxford area fear the impact all this could have on them. The Asian Network's Catrin Nye has been there to gauge their views.

Catrin's report on the Pakistani community emphasised how "tight knit" the community is. Everyone knew the perpetrators. She talks to one young man and asks him what impact this might have. He says people with daughters might start thinking all young Asian men are paedos, which is wrong, because it's a small minority that have done something wrong. Every race and creed is doing it, he says.  Other man says much the same.  It's every race and creed. The view is expressed that a flash, gangster element has come in and preyed on the girls just because they are vulnerable. Another expresses caution about talking about the issue, says they should stick together and repeats much the same 'everyone's doing it' line as the previous vox pops. It's every race and creed. Two others say it's nothing to do with their religion after Catrin asks them what they make of the charge that Muslim men disrespect non-Muslim women. She says they are all concerned about a backlash as a result of this case.

A very clear message was conveyed by that report: Every race and creed is doing it.

David Eades then continued, persisting with his "Asian" formulation - which he never deviated from:

As with the other well-documented cases, the crimes in Oxford do provoke argument as to how much focus should be placed on that Asian connection. I spoke to Yasmin Qureshi, Labour MP for Bolton South. She's a lawyer and Asian, and I asked her whether it's inevitable that young Asian men, like the ones we've just heard from, would feel tarnished by this case?

Yasmin Qureshi said, yes, she understood. It's like how young Afro-Caribbean men were stereotyped years ago, she claimed. The Pakistani origin of many of the abusers in these cases shouldn't mean they aren't investigated, she continued, but as "I know of" "one defendant" in "one case" who raped his own daughter, so "it can't be to do with culture or religion" [Yes, she really did say that!!!]

So, do you think dwelling on the Pakistani ethnicity of the perps and the white ethnicity of the girls is "out of order?", asked David Eades. "I think that is not right and it is not helpful in the debate," she replied, before going on to attack media reporting. This is about opportunity and vulnerability, she claimed.

David Eades pointed to people who say, yes, but it keeps happening, meaning there's "a trend" - to which the Labour MP responded that the victims in these cases "just happen to be young girls" [yes, she really did phrase it like that], they're from broken homes, in care, vulnerable, young, alone, lost. The men pick on them for their vulnerability.

But, David persisted, "these are organised groups from the same ethnic background". Only because "they happen to socialise with each other, because they happen to know each other", Yasmin replied.

Well, you can't say that the issue of ethnicity wasn't aired by The World Tonight. The issue of Islam, however, was downplayed again - especially by the programme's presenter. The choice of speakers with regards to this aspect of the story, however, was biased entirely in favour of those defending the "Asian" community against the charges we often hear, including from other "Asian" spokespeople such as Taj Hargey and Mohammed Shafiq.

Whitewashing sex gangs? There certainly seems to have been an element of that, doesn't there? - at least in these three BBC programmes from Tuesday 14th May. It could have been worse though. At least The World Tonight showed that the BBC was venturing a little bit further than it might once have done.
Posted by Craig at 21:54