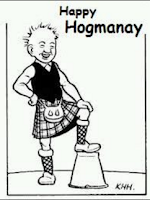 Just a few things I picked up from an old Archive on Four - as they are just right for New Year's Day. (You probably already know most it though)...

Hogmanay - or Old Year's Night - has long been something special in Scotland, partly because Christmas hasn't been.

Christmas used to be as popular as New Year, before the Reformation in Scotland. Thereafter the Kirk took strongly against it, calling it "popish and superstitious". They stamped on it, even fining people who tried to keep the traditions of Christmas alive.

The Kirk succeeded. Even in the early decades of the last century, Christmas Day was an ordinary working day in Scotland and children went to school. (They might get an apple from their teacher though). And this continued into the 1950s and '60s, even after Christmas Day became an official holiday in 1958. (Boxing Day only made the grade in 1974).

Hogmanay was marked on different days in the past though. The changes in the calendar from Julian to Gregorian in the 17th and 18th Centuries were assimilated gradually, so it depended where you lived when it fell. It could fall on several days and it was quite common for people (presumably those moving about a bit) to enjoy two Hogmanays instead of one.

January 1st being the start of the year is comparatively recent. Before 1600 it was 25th March pretty much across the medieval world - that being the Feast of the Annunciation. Pope Gregory XIII attempted to solve the anomaly of the lunar and solar years not matching and advocated (i) removing 10 days from the calendar and (ii) marking the calendar from January 1st. The Catholic world adopted his plan immediately. The rest of Europe adopted it slowly, and at different times. 1752 was the date for the British Isles. Scotland, perhaps because it wanted trade with France, was more pragmatic and adopted January 1st  earlier but - just to complicate matters - it stuck with the Julian calendar longer.

In the Highlands the old calendar was observed unofficially - sometimes 10, 11 or more days out of synch with the rest of the world - for years after the official change, and lucky children could still get two New Year school holidays - the old and the new New Years Days.

In the North East of Scotland, Auld Yule (or Midwinter's Night) was another important celebration - for years being one of four major seasonal festivals. (This was the opposite festival to the Summer solstice, with the two equinoxes also being marked). Auld Yule was 21st December but spread up to and beyond Hogmanay itself. It was surrounded by rituals designed to encourage the sun to grow in strength, such as fire festivals and various games. Some small remnants survive of this today, such as the fireballs still swung in Stonehaven on Hogmanay (with their echoes of pagan rituals to drive out the evil spirits of darkness) and the Viking longships still burned in the Shetlands (Up Helly Aa).
Posted by Craig at 00:00