And here's a transcript of that Newsnight interview: 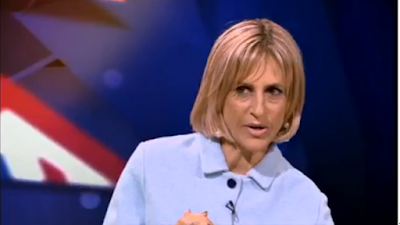 Emily Maitlis: Andrea Leadsom was one of the most prominent Leave campaigners. She ran for the Conservative leadership you'll remember in the days after last year's referendum, only to be beaten eventually by Theresa May. She's now  the Leader of the House of Commons. And earlier I spoke to her from her constituency in Northamptonshire. I began by asking what she thought of Donald Tusk's allegation that Theresa May's proposal offer risked worsening the situation of EU citizens.
Andrea Leadsom: I think that in fact what Theresa May made was a very generous offer but equally it's obviously going to be important to the EU Commission that they stick to their side of the negotiations, and you wouldn't really expect them to say, 'Thanks very much, that's wonderful!', so I think we're going to see a lot more of that in the days to come.
Emily Maitlis: Isn't it funny, though, when you've got Donald Tusk saying it's not good enough, and last night we had the president of the EU parliament telling Newsnight he doesn't have a clue what Britain wants from Brexit. Does that worry you?
Andrea Leadsom: Not at all. No. As I've said, when you are in a negotiation you don't immediately jump around clapping your hands with glee at the first sign. In fact you do the opposite. You say, 'No, that's not good enough. We need more. We need more'. And that is what you would expect...
Emily Maitlis: (interrupting) But this should be quite a simple one, shouldn't it? This should be a pretty simple place to start, and we are a year on, as you've said, from that vote, and they can't agree with the first thing they're trying to talk about. You think it's just politics, do you?
Andrea Leadsom: Well, Theresa May give her very initial comments to the meeting of the EU Council to explain to them the generous offer that we will be making, which is right that we should do that. We want to do it. And of course EU negotiators will start off by saying, You know, we need to see the detail. It's a good start but...'. You would expect that. I think we're going to see a lot of the negotiations and the handling of negotiations is going to be a challenging time, but we are determined to continue with a good relationship with our EU friends and colleagues.
Emily Maitlis: We're weaker than ever before. She's gone to the country. She didn't get the mandate she wanted, and she doesn't have a strong position from which to negotiate. That's the blunt truth.

Andrea Leadsom: Well, you know, Theresa May isn't of course satisfied with the majority that we managed to get at the last election, but we are the biggest party in government. It is not just our opportunity but it is also our duty to create a government, to take this country forward, to do everything we can to make a success of leaving the EU. We've done a huge amount of work on preparations for these negotiations. Our hand is very strong.
Emily Maitlis: You've got a negotiating position which is completely unclear. You're hearing that from the president of the EU Parliament. We've got a political system which is unstable, Many believe our economy is unfair. Living standards are falling. What can you point to now and say, that's going well?
Andrea Leadsom: European politicians are actually very keen that we keep a strong relationship going forward, and that is what we're going to do. And it's actually the elected politicians who are the important thing here. And...
Emily Maitlis: (interrupting) But come on, Miss Leadsom, you haven't even got a deal with the DUP on the table. They're laughing at us and saying they can walk all over whatever she puts up now?Andrea Leadsom: Well, that's blatantly not true, is it? Angela Merkel said it was an interesting start. We had Mark Rutte saying he was quite positive and optimistic about it. We had various different EU politicians, the elected politicians, saying it's a good start. Of course it's very early days, but... 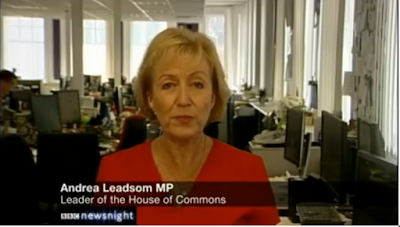