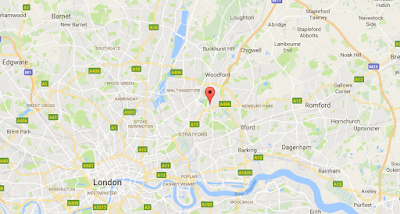 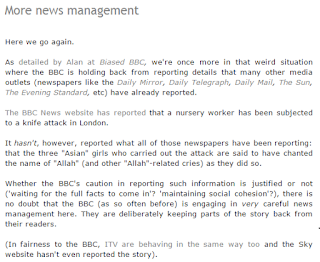 There have been claims that the BBC's news 'management' has actually gone a lot further this time.

I'm unable to load the video onto the blog but you can view it here. It's 'gone viral', because it contains a clumsy edit 17 seconds in.

Many people (from Katie Hopkins to Paul Joseph Watson) believe that the BBC was editing out - i.e. censoring - something that the nursery owner was saying.

I tried to find the original interview using TV Eyes but the BBC appears to have only ever broadcast this edited interview, having never interviewed the lady live and 'uncensored'.

Given how often she mentioned 'the Koran' and 'Allah' in her other media interviews it would be very surprising if she didn't mention them in her interview with the BBC. Whether the bit 17 seconds in was where she mentioned them or whether she mentioned them either before or after the part of the interview captured in that clip, we'll probably never know. But, using Occam's Razor, I would say it is much more likely than not that the BBC was engaged in some kind of 'news managing' by 'editing' some of what she said here - and that it was the very things Katie H and Paul Joseph Watson suspected (the Allah bits).

This, however, is where the plot thickens even more because a senior BBC reporter, Daniel Sandford, has made two forays onto Twitter (yesterday and today) in response to the Westmonster blog's criticisms of the BBC.

Here are his not-entirely-gracious tweets (in chronological order):

Curiously, I can't see him ever having directly answered any of the questions about why that video was edited and what was edited out, but nor does he deny it was edited; indeed, from everything he tweets it seems pretty clear to me that approves of the story being 'managed' in such a way so as to keep the 'dubious' claims out of the story until they'd been fully checked and verified. Interestingly, he also says that the police "cautioned against that version" of the story (the one containing the references to Allah and the Koran - a police caution that the BBC appears to have been faithfully heeded.

Here, incidentally, is where things gets even odder. Daniel Sandford makes the point that the local paper (the Ilford Recorder) has amended its version "as [the] interviewee has related her original (2nd hand) account". The BBC website, however, has gone in the other direction. Later yesterday evening the BBC finally followed all those other media outlets and added the bit about the Koran and Allah to its online report:

So if Daniel Sandford is correct and Ms Stevens has retracted her statement, then why hasn't the BBC followed the Ilford Recorder's example and updated its article to remove those references?

The problem with trying to 'manage the news' in this was is that you end up looking as if you're manipulating your audience - as the BBC evidently were trying to do here. By lagging behind most other media outlets for hours and not including the Islam-related bits until later in the day it only makes the BBC look like an over-protective nanny that doesn't trust its audience. And now, having reported such things at last, if Daniel Sandford is correct, the BBC now appears to be guilty of failing to update its story again after its main interviewee (apparently) changed her story.