Blow me down (updated)

Remember I told you I haven’t been watching much TV lately? Well, blow me down, no sooner had I (recklessly) switched on the BBC news channel this afternoon than I was confronted with an appalling report fronted by Paul Adams.

Even Happy Goldfish flagged it up, which is unusual.  Usually, H.G’s posts are merely ‘alerts’ to programmes with any Jewish or Israeli content. 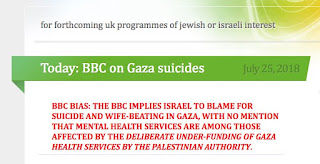 I must admit I missed the Today Programme this morning, and as the website no longer publishes the Running Order I haven’t time to fish it out amongst all the other silly-season dross. In any case, I don’t know if I could stomach it. Even for you, dear reader. (But you could  follow the link)

It seems that this bizarre topic (Why?) is being presented to us at this particular time for no particular reason. A slow day at Broadcasting house? I think not. There’s tons of real news.

Yes, there probably is mental illness in Gaza. So there undoubtedly is in Pakistan, where they blow each other up a great deal; and I’d wager most Islamic hell-holes have more than their fair share of mental disorders, psychosis, paranoia, suicidal and homicidal mania due to the oppressive nature of their unnatural religion and the ever-present threat of violence and murder.

Of course, if the BBC were suddenly to become honest, or impartial, or competent, or observant, or unbiased it would report, in full, exactly what has brought about this sorry state.

the Palestinian Authority and its leaders are opposed to any humanitarian aid to the Gaza Strip because they fear that this would embolden Hamas by encouraging it to maintain its tight grip on the Gaza Strip and absolving it of its responsibilities towards the residents living there. Once others start providing the residents of the Gaza Strip with aid, Hamas would be able to continue investing millions of dollars in building tunnels to attack Israel and smuggling more weapons into the Gaza Strip. Hamas would no longer have to worry about paying salaries to Palestinians or purchasing medicine and food.

These punitive measures include halting payments to thousands of civil servants and suspending social welfare assistance to hundreds of families. The sanctions have triggered a wave of protests throughout the West Bank and Gaza Strip in recent weeks, prompting Abbas's security forces to use force to disperse the protesters.

But it’s worse than that. Why the sudden interest in this subject from the BBC? At a time when the Labour Party’s credibility is crumbling, has the BBC, literally, joined forces with Jeremy Corbyn and John McDonnell? Or has it joined the foreign office and become full-frontal Arabist? They can’t report Syria properly and they can’t get their heads round the reality of the situation in the Golan.

All they can do is emote about self-inflicted immiseration (Great word, meaning economic impoverishment - thanks Douglas) in Gaza, and, through not telling the truth, i.e., through actually withholding the truth, blame Israel by inference. And get away with it.

It’s so blatant, so biased, so gratuitous, so untimely and completely indefensible.

Update:
After I posted the above, I saw this piece by Sean Durns which further advances the point I’m making. It sets out some pertinent facts about the nature and origins of the distress suffered by the inhabitants of Gaza, which, if he’s anything at all of a reporter, Paul Adams must know. Mustn’t he?


“In fact, many in the media—and the policymakers and pundits that they influence—tend to ignore internal Palestinian issues when Israel can’t be blamed. And recent events prove it.”


Having read Matti Friedman’s (essential reading) lament about his battles with Associated Press, detailing the deliberate suppression of stories that didn’t suit their preconceived Israel-bashing agenda, perhaps it’s not Adams, but someone higher up the chain that deliberately ignores awkward facts.
It has to be one or the other.

This particular report by Paul Adams (aired across the BBC) is just one example of the BBC’s crusade-like mission to acclimatise us to some kind of New Order. Delegitimise one group, appease another - ‘for social cohesion’ I think is how they see it. We are all Hezbollah now, don’t forget.

Anyway, it seems deliberately designed to inflame the existing animus towards Israel. As Billy Bragg might put it - “pouring petrol on the fire”.

“The Palestinian Authority, dominated by the Fatah movement, rules the West Bank. Under PA President and Fatah head Mahmoud Abbas, the authority has enacted punitive measures towards Gaza in an attempt to apply pressure on Hamas, Fatah’s rival that rules the Strip. Hamas, a U.S.-designated terrorist group with a fiercely antisemitic ideology, has controlled Gaza since besting Fatah in a short but bloody civil war in 2007.”

Among other actions, the PA has cut salaries to its employees living in Gaza, suspended social assistance to hundreds of families residing there, forced the retirement of thousands of civil servants, and reinstated the collection of taxes from previously exempt Gazans. The PA also quit paying Israel for the electricity and fuel that it provides to the Strip—resulting in severe power shortages for Gazans.

For its part, the misery endured by the average Gazan—misery that is not shared by their leaders, many of who live in luxury in Qatar —is a frequent media topic. Many journalists, however, blame Israel’s security blockade for Gaza’s troubles, often failing to note that it exists only because Hamas expends international aid and resources on rockets and terror tunnels to attack the Jewish state.  [...]


When Walid Al-Duheini of Rafah dared post on Facebook that Hamas was both stealing from and using the Palestinian people, operatives of the terror group murdered him. On June 22, 2018, the Israeli Prime Minister’s spokesperson, Ofir Gendelman, posted pictures of Al-Duheini, saying that ‘There must be international outcry over this.’ Yet, the media couldn’t spare a word.