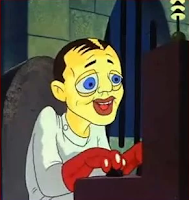 This week's The World This Weekend focused on the issue of a second EU referendum. It looked at it through the lens of Labour Party divisions.

Cue complaints from Corbynistas and Cadwalldristas:

And cue other complaints, more attuned perhaps to 'our way of thinking':


Classic 'complaints from both sides', eh?

I was thinking of posting something complaining that the BBC was pushing a second referendum myself here but after reading the above started doubting myself: Am I as bad as everyone else?

Well, if anyone's interested, I've got a cunning plan and I almost half-believe it too. I'm going to reconcile the Corbynistas and the Brexiteers, though sadly I'll be disappointing the pro-EU Cadwalldristas in the process:

Yes, the BBC was pushing for a second referendum here and it was going after Labour divisions in order to pressure Corbyn & Co. into supporting one too.

Or maybe it wasn't, and was simply reporting the news and chose to focus on the second referendum question because it's been widely discussed by parliamentarians this week, and chose to focus on Labour this time because the programme has already done so much about Tory divisions over Brexit in recent weeks (as it has), and chose Graham Stringer and Chris Leslie not because they both hate Jeremy but because they represent the opposite polls of opinion about Brexit within Labour.

I'm sorely tempted to add 'Whatever!'.

I've got a temperature, my head is whirling like one of Recep Tayyip's dervishes and my brain cells are functioning on low battery. What do you make of this, O clear-headed, non-dancing ITBB reader?
Posted by Craig at 17:33