Cuddly-Islam, part 1
'My wife can never call my name in public'
By Rebecca Seales
BBC News

Seriously? Srsly?
A whole page devoted to this inane article on the BBC website? 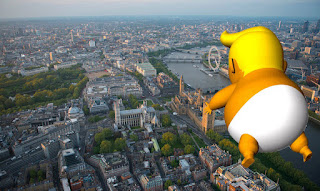 Deflated
Justin Webb spoke to that poor Leo Murray about his inflatable Trump-in-a-nappy stunt. We used to say ‘it takes one to know one’. Maybe someone should crowd-fund an inflatable Leo Murray-in-a-nappy. (Why bother. Nobody knows who he is.) Dr. Jan Halper-Hayes’s good-humoured response took the wind out of his sails.

Women’s hour (Cuddly-Islam, part 2)
Splish-splash I was havin’ a bath when I overheard some of this conversation with Kirstie and Katie on the radio.  Did they really avoid mentioning the motivation behind this horrific attack? From what I heard the motivation appeared to be almost incidental. As if it was a natural disaster or something. An act of God.

Labour's new anti-Semitism code of conduct.
I wouldn’t have mentioned this if it hadn’t been included in an early morning radio 4 news bulletin t’other day.

"Labour has taken some of the language used in the International Holocaust Remembrance Alliance (IHRA) definition of antisemitism, which is now widely accepted as the most useful definition and has been adopted by the government, the Crown Prosecution Service, many local councils and many other countries.
But instead of adopting the definition as agreed by all these bodies, Labour has excised the parts which relate to Israel and how criticism of Israel can be antisemitic."

They're keeping the following four back for themselves: (why the American spelling I'm not sure)

The Labour Party needs to be able to still use these terms and memes with impunity. They’re not antisemitic; oh no, they’ve fought antisemitism all their life. (For or against?)
Posted by sue at 00:10