The BBC in the witness box - a judge rules

It's not been a good day at the office for the BBC today after a High Court judge ruled that the BBC's coverage of the arrest of Sir Cliff Richard was an invasion of his privacy. Sir Cliff has been awarded £210,000 in damages.

The BBC's response to the judgment has been widely characterised as "sorry, not sorry". They are even thinking of appealing. (At what cost to the licence fee payer?)

Here are BBC Director of News Fran Unsworth two major statements today. The first was sent to the world: 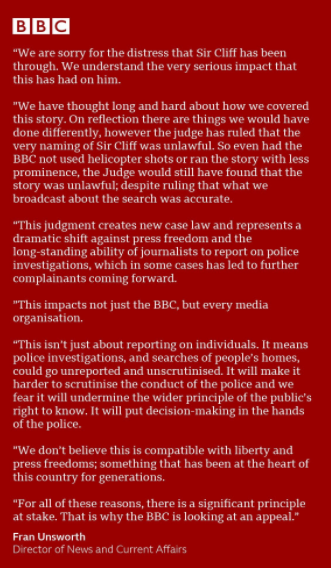 The second was sent to BBC staff: 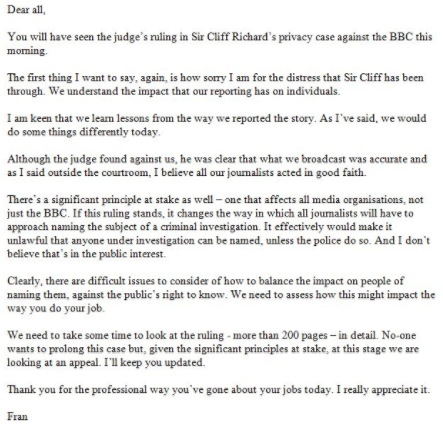 Reading that and then reading the judge's opinion on his BBC witnesses, as laid out here, it seems to me that Ms. Unsworth's comments are rather tinged with wishful thinking - especially as far as the BBC journalist accuracy and honesty goes. (I've highlighted the most damning passages): 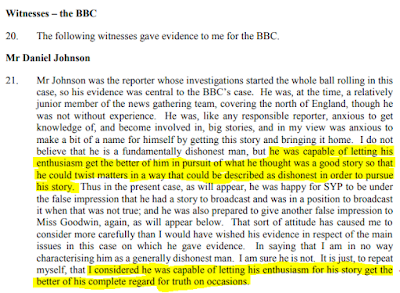 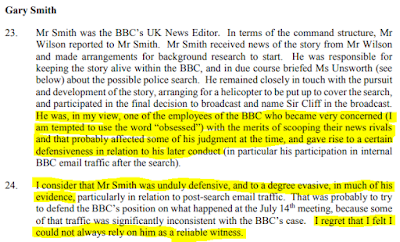 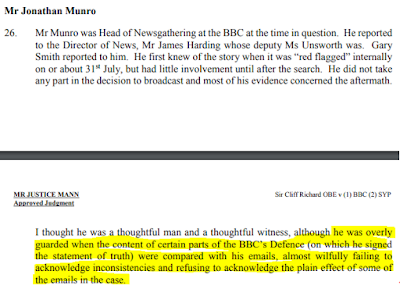 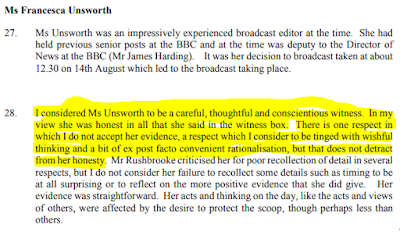 ...and particularly the comments about BBC reporter Dan Johnson "twist(ing) matters in a way that could be described as dishonest" and about him "letting his enthusiasm...get the better of his complete regard for the truth on occasions"...

...pulls the rug from under Fran Unsworth's claim that "the judge...was clear that what we broadcast was accurate".

The judge, in fact, appears to have been "clear" that what the BBC broadcast was far from being wholly accurate.

As for the senior BBC editors involved, Fran Unsworth herself came out best. The judge evidently liked her and found her to be honest, thoughtful and conscientious. But his comments that, during the trial, she'd engaged in "wishful thinking" and "ex post facto convenient rationalisation" still sounds pretty damning.

Gary Smith - now BBC Scotland's Head of News and Current Affairs - comes off worst. The judge found him to be an unreliable witness at times.

And Jonathan Munro, the BBC's Head of Newsgathering - a familiar 'we got it about right' BBC defender on the likes of Newswatch and Feedback -  appears to have found that his 'we got it about right' spiel fails to wash with High Court judges. Though Mr Justice Mann liked his thoughtful manner, he found him "overly guarded" (Welcome to our world Mr Justice Mann!) and said he was "almost wilfully failing to acknowledge inconsistencies and refusing to acknowledge the plain effect of some of the emails in the case". (Again, welcome to our world Mr Justice Mann!).

There's an expectation floating around that, in true BBC style, assistant heads will roll over this.

Update: In a fine example of that internet law (Muprhy's? Skitt's?) which states that any post criticising someone else's inaccuracy of another will contain an inaccuracy itself, I don't think I was entirely factually accurate in this post.

Looking at it again (with a little prompting!), it was the section on Dan Johnson which I read as being critical of the accuracy of the reporting itself. All the other criticism of the BBC here relates to their testimony only.

Reading that section again and then reading on, the bit about Mr Johnson "twisting" things "in a way that could be described as dishonest" relates to his behaviour in getting the report - specifically twice giving "false impressions" to South Yorkshire Police - rather than the actual content of his report. Indeed, the judgment later goes on to say:

The veracity of the published information in this case is not in issue. What the BBC published was accurate. What is more questionable is the method of obtaining the information.

So Fran Unsworth's carefully worded statement is correct when she says "the judge...was clear that what we broadcast was accurate".
Posted by Craig at 20:17