Look at Guido —> The sidebar screams “PM runners and Riders.” I guess we’re meant to think PM stands for Prime Minister. Leadership election? Oh no! Not anerther wun!
But no. It’s just the BBC reshuffling the same old same olds.

Of course by the time I’d written that it’s outdated. Guido posts a new something every ten minutes.

(Back on topic) According to Guido, rumour has it that the contenders are: Emma Barnett, Carolyn Quinn, Mishal Husain, Martha Kearney, Laura Kuenssberg, Robert Peston (?) Vicky Young, and just for the hell of it, Amol Rajan.

A few btl commenters immediately said what I would have said, e.g.,  “time for fresh ‘talent’ ”, “at least Victoria Derbyshire isn’t on the list” and “stopped listening to PM ages ago.”
Anyway, it’s Guido’s descriptions that amused me. 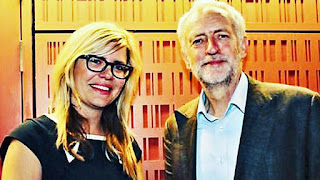 Headline-maker fast becoming a household name thanks to her fearless Brillo-style grilling of politicians.

Yep. She once gave Corby a hard time by revealing his shaky grasp of economics or something. She’s tenacious, which is a laudable attribute but not always productive  - think Paxman. But she’s Jewish you know; at least that will annoy the Momentumistas

Yes, but not all that likeable.

Are you quite mad?

Huge experience of Radio 4‘s daytime news output over 11 years on The World At One.

But I’m already tired of hearing her voice on the Today Programme. I have to say I prefer listening to male voices on the whole. (Not on the whole; on the radio.)

Famous for his on air ‘banter’ clashes with Mair,..

Not really. Famous for his idiosyncratic delivery.

The ubiquitous media editor can never be ruled out of any BBC presenter role.

His contract stipulates that he has to be on everything, and now it’s getting a bit too obvious.
Posted by sue at 17:42