Radical chic at the BBC

Rod Liddle is on fine form in The Sunday Times this morning, accusing the BBC of "radical chic attitudinising" for broadcasting Raja Shehadeh's Where the Line is Drawn as Radio 4's Book of the Week this past week.

Sue described the same Book of the Week earlier this week as "unadulterated pro-Palestinian propaganda in the form of the creepiest passive-aggressive grievance-mongering" and having heard it myself now I know she's got it spot-on.

Responding to the chap at the BBC Press Office who sends out a weekly bulletin about what the BBC's up to, Rod replied: 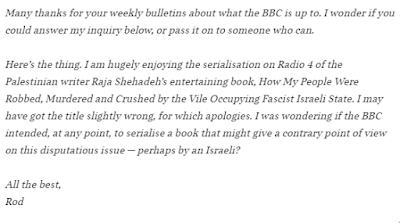 The BBC responded with "a two-line reply" stating that its coverage is "impartial". (What a surprise!)

...naive middle-class liberals who believe the Palestinian cause is unequivocally just and there is no real argument about that. Which is why, when Hamas rains 200 rockets and mortars down upon Israel, you hear nothing on the BBC. You hear about it only when Israel responds.