"Do you believe that democracy should trump everything else?" 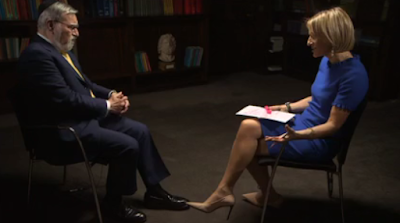 I'm going to say something really unpopular, which is that we keep on talking about, you know, the problem with democracy and the problem with the deficit, but at what point you to say, actually, democracy is not as important as the future economy and stability and prosperity of the country right now?

Well, she was pursuing that very point again with Lord Sacks on last night's Newsnight:

Lord Sacks: Don't forget Churchill won the Nobel prize for literature, not for peace. The great statespeople have a hinterland. They care about bigger things than politics, and that makes them great politicians, because it makes them able to relate to people of all different kinds, whatever their political views.
Emily Maitlis: Do you believe that democracy should trump everything else? That the delivery of Brexit, even if it's economically and socially damaging, is the most important thing of all?
Lord Sacks: Democracy is one of the most profound political ideas ever, because it says everyone of us counts. Every one of us has a voice. You lose that, you lose everything, because it then becomes a game for the rich and powerful, which is great for them and bad for the poor and the powerless.
Emily Maitlis: So, delivering democracy, even if it results in national economic damage is imperative?
Lord Sacks: I think being a parent means trusting your children even if you're sure they are getting it wrong. Believing in politics means believing in democracy even if you're sure the electorate is getting it wrong. You have to empower the electorate. That is what democratic faith is about.

This is seriously disturbing stuff from a BBC interviewer.
Posted by Craig at 07:04