The reason Andrew Neil is stepping down 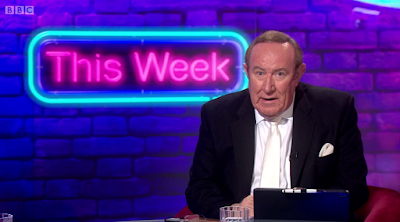 A kindly Jeremy Corbyn supporter tweeted Andrew Neil the other day to say, "Who watches this crap?", in response to a Twitter ad for BBC One's This Week (my favourite of the BBC's politics shows).

This naturally provoked Mr. Neil, who replied, "Over 1m. At midnight. Four times audience share of Newsnight. But they are forced to. Or their licence fee is doubled".

Those figures, if correct - and, given that it's Andrew Neil, they very probably are -, don't reflect well on Newsnight, do they?

A Brexit-supporting Twitterer then sent Andrew his warm regards, along with a suggestion: "Brilliant Andrew! Please don't go but instead lobby to move program to 7pm BBC2. Then see how many tune in!"

Andrew replied: "That’s a very good idea. But the reason I’m stepping down after 16 years and regularly getting 1m audience at midnight (no other show gets that on weekdays) is that the BBC didn’t want to move it to an earlier time. BBC2 at 7pm would be fine with me. We could get 2m!".

What a good idea! Scrap Newsnight and put This Week on a 7pm each evening instead.

Anyhow, in honour of Mr. Neil, here's his intro to this week's This Week - some two hours after the polls closed in the UK this Thursday. It contained some decent jokes:


Evenin' all. Welcome to This Week, on the day Britain voted in the European elections. We won't get the results until Sunday. But the polls have closed, so we can  now go back to saying whatever we want. Except that word came down from various BBC Yentobs and Ofcom jobsworths pointing out that the rest of Europe had still to vote - I mean, who knew? - and that we had to be careful not to say anything that could swing things "sur le continent". Now, I bow to nobody when it comes to estimating the influence of This Week. But really? I mean, really? For a start, it's already a quarter to one on the European mainland. Sensible folks are asleep. Second, we're really not big in Estonia. Or the Czech Republic. Or Luxembourg. Actually, nothing's big in Luxembourg. I wish it were, but it's not true. Now, we do have a viewer in France. But I don't think Molly the Dog has a vote. As for Slovakia and Slovenia? Well, we don't do well in countries beginning with S, as our Scottish ratings illustrate. But before we move on let me just say this - London Calling Lithuania, London Calling Lithuania. The Blue Cow Jumped over the Yellow Moon. There, that's fixed the voting in Vilnius.