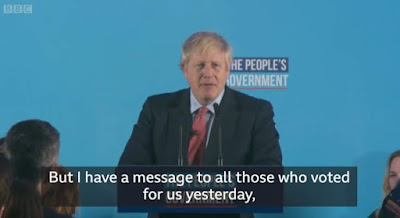 A few observations, but please make allowances for someone who only managed about four hours sleep.

Thank you for a lively open thread.  (You may use this as a new one if you like)

The magic has deserted the grandpa. The full pronunciation of ‘Party’ has resumed; Jeremy's ’T’ has been restored to its rightful place. He probably deduced that pandering to glottal-stopping troops was a waste of time if they’re going to just turn on him and kick him when he’s down.

Although I wouldn’t class Lisa Nandy and Lucy Powell as particularly disloyal, or Corbynista troops -  not by a long chalk - but don’t forget, they would have stood by him if Labour hadn’t been thoroughly trounced.

Both of them publicly turned on him this morning, albeit in measured tones.  Lucy Powell said he could have shown some contrition and taken responsibility for Labour’s failure. He didn’t. He was irritable and he doubled down on the weaknesses in his campaign with remarkably stubborn intransigence. Sulky and, what’s the opposite of magnanimous? Mean-spirited?

I was sorry that Caroline Flint lost her seat. She was magnanimous. That's the way to do it.

What will happen next?

Where will all the antisemitism go? It’s out of the bottle and it can’t go back.

Let’s see how the BBC will adjust. Will they pretend they weren't institutionally hostile to the Tories all along?

Look at "ex-BBC" Paul Mason! I think he's completely lost touch with reality. Yet the BBC once employed him as a BBC economics expert. Look at shifty Shami Chakrabarti. She's been interviewed by the BBC's finest a few times since 'the whitewash'. Yet she wasn't even challenged on the fiasco of a report that earned her a peerage.
But, hey. Pheewwww!
Posted by sue at 16:24