The supernatural means by which I cause harm or destruction (I think I mentioned them in my previous) are manifesting indirectly, via the pen of Rod Liddle.

Once again Rod has written a piece after my own heart. Following his preamble about Diane Abbott, which I must have accidentally transmitted to him brain-to-brain during the fallout from last week’s Question Time, he dived (dove(?)) straight in with a litany of stuff about Malaysia’s Prime Minister, Mahathir Mohamad.

It’s obvious that I transmitted this to Rod Liddle in the form of demonic telepathic messages, or why else would his piece deal with matters I’ve thought about, nay, mentioned myself?

One of which is Tom Watson’s attempted intervention in the Malaysian government’s ban on Israeli swimmers coming into the county to compete in a Paralympics event they’re hosting, as well as the antisemitic nature of Malaysia in general. (I must say Tom Watson is looking a little perkier in the illustration above Rod’s piece than in the pre-weight-loss image HuffPo chose to use.)

[Malaysia’s Prime Minister, Mahathir Mohamad] “has described Jews as ‘hook-nosed’ and commented that they understand money instinctively, meanwhile denying that six million Jewish people were killed in the Holocaust and insisting that Israel should have no right to exist. Nor does he have much time for the concept of anti-Semitism, per se. He told a BBC journalist: ‘Anti-Semitic is a term that is invented to prevent people from criticising the Jews for doing wrong things.’ He said Jews, you will note — not Israel.

(I was curious as to how the BBC journalist in question responded to that idea.)

But then the country, with its Muslim majority population, is steeped in anti-Semitism.”

Readers! That’s the content of my telepathic message, ‘word-for-word’!! It’s so comforting to know that one’s demonic, supernatural powers are still in good order.

The below the line responses to Rod’s piece are nearly all sympathetic. What a turnaround from  - well, not so very long ago - when the space below any article about Jews or antisemitism would be chock-a-block with ignorant comments from bigots and racists. And I do mean in the Spectator (and the Times and Telegraph) as well as their ancestral home, the Guardian, where that sort of antisemite permanently squats. 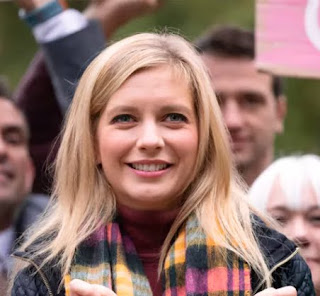 It’s due to attractive people speaking out that people are beginning to wake up and smell the coffee.

Rachel Riley has also been writing in the Spectator. Her beauty and intelligence give her a huge advantage. People will sit up and take notice of what she has to say, so lucky, lucky, lucky her. But not lucky enough to be immune from the tsunamis of antisemitic bile for which social media is renowned.

I read the transcript of the HoC debate “That this House has considered Holocaust Memorial Day 2019”,  a motion brought by Ian Austin MP.

There were some moving speeches, but to me, the occasion was somewhat marred by the obligatory ‘inclusiveness’ that political correctness has forced into this commemoration. Yes, there have been other genocides, but the Holocaust was unique. It was preceded by an unstoppable tide of antisemitism, which polluted and overwhelmed civilised society. A prolonged process of demonisation and delegitimisation, all based on lies and conspiracy theories, which culminated in an industrialised programme of extermination.

No. Don’t dilute the memory with “and other atrocities”. The Jewish Holocaust was unique and deserves its own dedicated commemoration.  And antisemitism is not the same as Islamophobia.

The BBC hasn’t been helpful. Over the years it has added to the palpable hostility one can detect in the atmosphere. (Supernatural powers not necessary.)
Posted by sue at 21:37