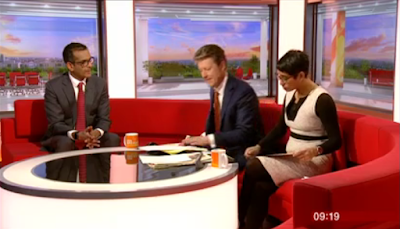 Following on from his Question Time appearance on Thursday Professor Anand Menon was back on the BBC as the paper reviewer for BBC Breakfast this morning.

I was intrigued by the heavy-handed way he was introduced each time:

8.18 - Charlie Stayt: Time now for a look at the newspapers. Our guest this morning is Anand Menon, who's from UK in a Changing Europe. Particularly at the moment, and in Brexit times, people are very keen to make sure they know where everyone's coming from who we broadcast with. So just explain - I know you've told us before: Your organisation does what?
Anand Menon: Well, we're a network of academics and, basically, what we're funded to do is to let people know what the research says. We're not allied to any side. We have to be impartial. We simply say, I've carried out a couple of years research on, for instance, what the economics of Brexit might look like, and this is what I've found.

9.18 - Charlie Stayt: Anand Menon is with us this morning, director of UK in a Changing Europe. Do the explainer for us so that everyone knows who you are and what you do.  Tell us who you are in what you do?
Anand Menon: We're an impartial network of academics that simply lets people know what the research says.

Well, that second introduction was immediately followed by one of the BBC's 'most impartial', Naga Munchetty, letting slip a predictable opinion of her own:

Naga Munchetty: OK, one of the stories that you've picked out....and I will put this to you. I don't understand, or lots of people don't understand, why we spend so much time talking about Nigel Farage.
Anand Menon: For several reasons really. Well, one is he's box office. I mean, he's good, he's entertaining, so the cameras like him...
Naga Munchetty: (interrupting) OK, what's his place when it comes to Brexit negotiations?
Anand Menon: His place when it comes to Brexit...
Naga Munchetty: (interrupting) Now. Not from the start, but now.

That's all very 'Samira Ahmed' from Naga there, thinking that Nigel Farage shouldn't be paid attention to.

Here's how it went on. As you'll see, Naga followed through on her first point:


Anand Menon: Now, I think he is positioning himself so that if he can credibly argue that there has either been a watering-down or a delay or a cancellation of Brexit, he's planning to relaunch his political career. And you can see there the danger for Theresa May from her right flank, which is, if she does what a lot of people are saying, which is to softens Brexit, join a customs union, join the Single Market, the Brexiters in her party will be very annoyed and people like Farage will make capital out of it.
Naga Munchetty: Isn't this though, if that's the case, if Theresa May pays the attention to Nigel Farage that David Cameron did, isn't there the danger of falling into the trap that some say David Cameron fell into did, because of the noise, the noise, around Nigel Farage being picked up and being given too much prominence?

Impartial like the BBC, Anand?
Posted by Craig at 18:27