Christopher Booker cheerfully drives his tractor into a ditch 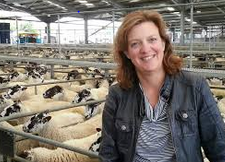 I think Christopher Booker may have published his least popular article at the Sunday Telegraph today.

I suspected as much when I saw the surprisingly small number of comments below his article.

And then when I saw the top-rated  comment, beginning "Sorry Christopher...", I knew something was seriously amiss.

What had he got so 'wrong'? What had so put off his faithful readership?

BBC is not always as bad as I often say

Here's the whole of this part of Mr Booker's Sunday Telegraph column:

Farming Today's Charlotte Smith is entirely at home with both countryside and farming.

Despite the constant examples I report of the relentless bias and professional shortcomings of the BBC, I am first to admit that here and there in that horribly flawed and absurdly self-satisfied organisation there are still admirable people, whose good work is much appreciated.

Years ago, when I often wrote here about the mess being made of British agriculture, I several times had a go at how Farming Today had ceased to be a serious programme, featuring certain female reporters who seemed to know nothing about farming or the countryside.

A shining exception to this recently has been one of its current presenters, Charlotte Smith, who seems entirely at home with both and (like her counterpart Helen Mark on Open Country) can talk expertly, pleasantly and with common sense to everyone she interviews.

A fine example was last weekend’s item about the man who, amazingly, still happily runs his family’s 200-acre farm, split up into little parcels all around and even inside Heathrow Airport.

Like all Smith’s reports, it was superbly professional and a fascinating little gem.

However loud the clamour may grow for the BBC to be abolished – and its failings are so culturally ingrained that it is hard to see how they could ever otherwise be remedied – we would miss the rare contributors like her who alone make one quite happy to pay the licence fee.

Having a bit of a soft spot for Charlotte Smith too, I was happy to read his lovely tribute to her.

And that last, most 'disappointing' paragraph of all, where Christopher Booker grows wistful about some of the collateral damage that might occur if the licence fee were to be abolished, strikes a strong chord with me too...