Yesterday's From Our Own Correspondent featured a report from the strive-torn Central African Republic by blog favourite Steph Hegarty (here in her Sunday best as 'Stephanie Hegarty').

Her report was interesting and well-crafted, containing one of those striking details that FOOC excels in.

The country's capital Bangui has a Hollywood-inspired landmark - a sign bearing the words 'Bangui the flirt' in French: 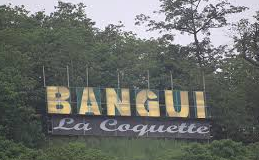 Unfortunately, some time during the recent horrors there, some of the letters from that sign have gone missing.

Steph, as regular readers will know, appears on this blog due to her highly opinionated tweets, under the BBC's banner: 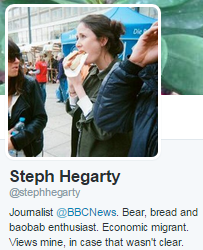 What the hell does Rupert Murdoch know about the racial divide?
— Steph Hegarty (@stephhegarty) October 8, 2015

If this speech is about politics May was threatening vulnerable people for sake of her own career- thats frightening http://t.co/vTrQ8okgvV
— Steph Hegarty (@stephhegarty) October 7, 2015

That kind of thing.

Does she hang her coat of 'Twitter bias' at the door when she goes to work? Does her often loudly Islamophilic tweeting, say, reflect itself in her official BBC reporting?

Well, this piece doesn't give a clear-cut answer. The only section that raised any doubts in me was this one:

Bangui, once mixed, is now a heavily segregated city. After a brutal coup by the Seleka, a predominantly Muslim group in the north, local vigilantes emerged to drive the coup-makers out. They terrorised ordinary Muslims too. "That's a Muslim house. That's a Muslim house", Eric says, pointing to the burnt-out adobe walls which are dotted throughout the city...Muslims in Bangui now only live in one area....

Earlier she'd mentioned a Christian refugee camp in the city, so she did hint that the balance of suffering wasn't quite as one-sided as this section might have suggested and, on top of that, that section shows her balancing the 'brutality' of the coup against the 'terrorising' nature of the reaction to it.

My one remaining doubt then concerns the fact that she leads her listeners to believe that the Muslim coup makers were brutal against...well, she didn't spell that out (previous regime supporters maybe?)...but that the (Christian) vigilantes were worse in that they "terrorised ordinary Muslims too".

In fact, as we posted a year and a half ago, the 'predominantly' (or pretty much exclusively) Muslim Seleka coup makers were the first to brutally target ordinary members of another faith community (Christians) en masse:

Armed Muslim units drawn from the Seleka rebel alliance that seized power in March have defied the new president’s demands that they disarm, and have continued the rampage they began before their successful coup. They have targeted mostly Christian civilians, murdering, raping, torturing and kidnapping children, as well as looting property. In retaliation, self-defence militia manned by Christians and loyalist supporters of the ousted leader have formed to fight back. As they have grown in numbers and strength, the violence has worsened.

Would you get a proper sense of that from Steph Hegarty's presentation of the history of the conflict on FOOC? I don't think you would.

Is that down to bias (conscious or otherwise)?
Posted by Craig at 09:25