Both Sue and I have said uncomplimentary things about BBC One's Sunday Morning Live.

First we have the permanently startled looking Sian Williams who’s supposed to keep order. The guests inflicted upon her by the BBC speed-dial department don’t make matters easy. They tend to favour verbally incontinent Muslims like Ajmal Masroor, who can’t bear to listen to anyone but themselves,  and who often keep going without even bothering to do that.

In the middle sat Sian wearing a skimpy skirt made out of a scarf perilously held together by a short frontal zip. The strain of keeping it in place must have added to the general stress.

Today, from left to right, we had John Gaunt, who isn’t the least bit gaunt...

I wrote something similar in October last year under the title Bun-fight at the BBC Corral:

This morning's edition was another classic. Sian looked permanently startled again. The BBC speed-dial department inflicted upon her yet another collection of shouty know-nothings, flame-throwers, wingnuts, moonbats and gobshites (and Rosie Millard, who's none of the above). Chaos, shouting and one almighty bun-fight ensued. All hell broke loose. Sian begged for order. All hell broke loose again.

All that was missing from the spectacle was Wolf, Jet and Saracen from Gladiators coming on to clobber Gaunty and Darcus Howe with some outsized cotton buds and, for a final treat, the release into the BBC studio of half a dozen hungry and bad-tempered lions.

Anyhow, the opening question today asked: "Is Britain racist?" in advance of a BBC Three documentary starting tomorrow asking the same question - as part of BBC Three's 'race season'. (And you can't get more 'BBC' than that!)

Sian's framing of the discussion - and the chosen clip from the documentary showing a hijab-wearing Muslim girl complaining about racism - focused particularly on "anti-Muslim racism". (And you can't get more 'BBC' than that!)

Sian and the makers of Sunday Morning Live seem to believe there's such a thing as "anti-Muslim racism". Others strongly disagree (and this is the kind of discussion you're most unlikely to hear on Newsnight or Today):

It was balanced between Gaunty and Rosie, who think we're less racist these days and Darcus and Myriam who think we're more racist (though she seemed mainly bothered about how Muslims are treated).

Darcus and Gaunty got into several loud slanging matches.

One of the oddest moments came when Sian Williams asked:

Is it not significant though that the two people who are white are saying that Britain isn't racist and the two that come from different communities are not?

Well, Myriam Francois-Cerrah may come from a "different community" but she's not one bit less white than either Jon Gaunt or Rosie Millard (having been born in London of French and Irish descent): 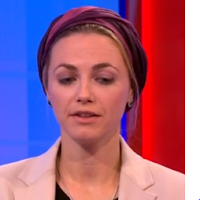 Still, I think I may have changed my mind a bit about this show in that at least it tries to feature people from beyond the cosy BBC consensus, expressing views BBC staff (and the Twitterati) might feel uncomfortable hearing (rather as Sian seemed to be discomforted when Jon repeatedly brought up Rotherham and Muslim grooming gangs).

Having sharply contrasted view can generate light as well as heat - as last week's edition on the role of charities (starring one David Vance) proved.

What were they thinking, bringing in Darcus Howe! ??

John Gaunt, eat your heart out!

Oh how one misses Joan Rivers, and John Gaunt, you are no Joan Rivers.

Oh, and by the way. Are we racist? No, and don’t mention antisemitism.

Even ruder interruption / Update (by Craig)

Yes, that's a must-watch video to anyone who hasn't seen or heard it.

Jon (whose podcasts are great fun) was strangely cautious in the face of Darcus's usual emotive bullying today.

You've got to take The Joan Approach with someone as selfish and shameless as Darcus - especially as (despite his advanced years and all the accumulated wisdom you'd hope he'd have learned by now) he still keeps on ruthlessly playing the 'racism' card (coupled with the 'wounded soldier' card) against people who aren't racists.

He never seems to grow wiser, does he?

And, no, there wasn't any mention of antisemitism.

Myriam mentioned that recent report about the rise in anti-Muslim attacks in London without mentioning (just as the BBC notoriously failed to mention too) that the same report showed a much steeper surge in antisemitic attacks in the city.

No one picked up on that. Certainly not Sian (who likes correcting people's 'facts' - as David Vance discovered last week, especially on her pet subject of mental health). And not even His Gauntship.
Posted by Craig at 13:48