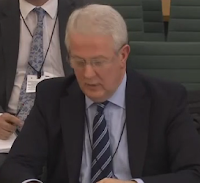 Apologies for the lack of posts in recent days. Sue's away and I've been otherwise engaged. (Some of the perils of blogging!)

One of the big BBC-related stories of the past week has been the appearance of Lord Hall, James Harding and David Jordan at parliament's European Scrutiny Committee discussing the BBC's policies in the light of the upcoming EU referendum.

Two parts of the discussion have dominated the media's reporting of it:

The first was that "all BBC journalists" will be sent for "mandatory training" so that they become "as well-informed as possible of the issues around the workings of the institutions of the EU and its relationship to the UK".

The second concerned the meeting's most heated moment - when Jacob Rees-Mogg confronted David Jordan (director of editorial policy and standards) over EU funding for the BBC - the reporting about which has been somewhat confusing (to my mind).

On being pushed further (over a FoI request by The Spectator into EU funding for the BBC), however, things got murker and Mr Jordan and Mr Rees-Mogg began to fall out:

David Jordan: There are two things you were referring to - the question that you asked last time, which was in relation to Media Action, so I answered...

David Jordan: Well, it's that £35 million figure which you quoted which relates to the Media Action...

Jacob Rees-Mogg: But you replied about Media Action when I was asking about all EU funding....

Having watched their earlier exchange again, Mr Rees-Mogg is correct. He didn't ask about Media Action or "quote" that £35 million figure earlier. Here's how their discussion started:

Jacob Rees-Mogg: I just want to go back to a question we came to the last time you came to the committee, on the money that the BBC receives from the EU, which I know isn't huge in your overall budget but which is still some tens of millions. One of the standard contractual terms when the EU hands out money is that those receiving money won't say or do anything damaging to the interests of the EU. Does the BBC agree to those standard contractual terms and will they take money from the EU between now and the referendum?

The committee's chairman, however, only added to the confusion here by wrongly ascribing that "quote" about the £35 million to Mr Rees-Mogg himself shortly after, so maybe Mr Jordan's apparent confusion on that point is more understandable:

William Cash: Why do you need to receive the £30 million I think that Jacob referred to...?

The disagreements continued, however, and David Jordan, in answer to pushing on that Spectator FoI request, said that independent companies who make programmes for the BBC also receive some EU funding and that the EU also funds some other things, such as translating programmes made in English into other EU languages (as seemed to have been the case with the highly controversial pro-EU mockumentary The Great European Disaster Movie).

Jacob Rees-Mogg was not happy:

Jacob Rees-Mogg: Look, you are now giving me a really different answer from the one you gave before. I never mentioned Media Action. I only mentioned EU funding. You gave an answer about overseas aid and now you're saying the BBC does receive money to help with some of its programming and does receive money to translate some of its programming and you are therefore signed up to the contractual agreements from the EU that require you not to damage its interests. Why didn't you give the full answer the first time.

Jacob Rees-Mogg:...which you denied in response to my first question.

William Cash then told them to calm down and moved the discussion on - which is unfortunate, I think, as many issues were still left dangling in the air over the EU money that isn't spent on Media Action. Mr Rees-Mogg still seemed unclear about that. I'm certainly unclear about it.

And does the BBC sign up to that contractual agreement with the EU when it accepts the funding for innocuous-sounding tasks like translations and those other aspects of programming (whatever they may be exactly), apparently always involving independent companies?

And what if those independent companies only produce pro-EU programmes for the BBC (like The Great European Disaster Movie?) How would that free the BBC from charges of pro-EU bias? Does their independence' and the apparent fact that the EU money they get goes on things like translations really get the BBC off the hook here?

Such questions need a lot more scrutiny.
Posted by Craig at 11:25